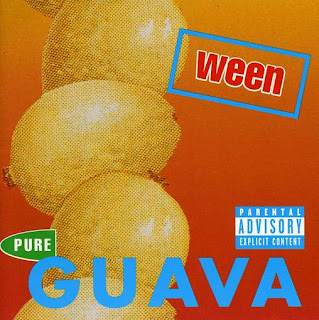 Part of the reason why I love Ween so much is their humor. I relate to it. On a daily basis. And I can be a problem.

Because there isn’t that many people who can relate or immediately appreciate this kind of humor. It’s druggy, nonsensical, childish, and downright wrong at times. So whenever you meet-or in this case, hear-someone who expresses the same kind of humor, you’re a friend for life. Mainly because you don’t have to preface anything before you begin to unleash some truly inappropriate comments about something.

Pure Guava was my first exposure to Ween, so this would have been the record where I first caught a glimpse of Dean and Gene Ween’s inappropriate behavior. It is with this album that I began to appreciate the duo’s work and keep up with their whereabouts.

It began with the “Secondary Radio Markets Promotions Representative” for Elektra Records named Traci. She was swell. More than any other person that I dealt with on a weekly basis as the Music Director for some small town radio station in . The only other person who could compare to her was some other rep-I believe the dude was on RCA’s payroll-who I always thought was an asshole until one day I referenced Steve Albini to him. From that point on we were buds. He told me about a Big Black show he attended where Albini came up to his friend as he pulled out a cigarette, and asked the unsuspecting smoker “Need a light, buddy?” Albini then produced a blowtorch or some kind of welder’s torch, which he proceeded to use as a cigarette lighter.

Traci at Elektra was different, though. She was a girl and I was a guy, and the fact that I could have educated and extended conversations about music-on the company dime, no less-was pretty awesome to me. We were both in relationships, so it wasn’t about anything sexual, and the fact that I was in and she was in put a stop to any real social encounter. The guy she married also worked at Elektra, and when he got a big promotion, her job became eliminated, primarily due to the fear of the way their relationship would look to other staff members.

Needless to say, Traci would provide me the hook up to all of Elektra’s releases and promotional items that were beyond what my station would normally play. Pure Guava resulted from that relationship and I appreciate that in more ways that can be explained with this resulting “review” of it.

First of all, I marveled at the fact that anyone…ANYONE…would could pull off releasing an honest-to-goodness four track recording on a major label like Elektra. This was the shit that you remembered from the late 60’s or late 70’s when record companies had no idea what they were doing, other than sending out droves of A&R people with orders of “Sign more hippies” or “Get me some punk rockers on our roster.” There is nothing in Pure Guava that hints at commercial potential, and whatever funds that Ween secured from Elektra records-at the time part of the massive WEA group, which included Warner Brothers and Atlantic records-should be immediately cashed for fear that someone will figure out the ruse and put a stop payment on the advancement.

The record is known for “Push th’ Little Daisies,” the single that was later incorporated into an episode of MTV’s Beavis & Butthead who declared it to be the worst song ever. The “endorsement” was enough to propel the song into the alternative top 40 (for whoever kept such a tally) and the top 20 of the Australian singles charts, because they put acid in Vegemite down under.

The song is easy and incredibly catchy, but it doesn’t hold a candle to the inherent weirdness that lays throughout Pure Guava.

The record begins with “Little Birdy,” a sweet ode to our winged friends that seems to go horribly wrong with its warble guitars and pitched vocals. At one point, Gene cracks up, explaining, “See, the birdy make me laugh/Take a little birdy bath/I don’t know why he got me high.”

To me, it all made perfect sense.

Gene and Dean also break character on “I Play It Off Legit,” another weirdo favorite that examines the parlance of the times, specifically, the word “legit,” as in to be “legitimate.” The brothers carry on what sounds to be a phone conversation, which is nothing more than a declaration of things that are, or are not, “legit.” To clarify, “Mom bought me a cool shirt/When I wear it, I’m the shit/Really not that legit/My Mom bought it.”

Highlights are “Pumpin’ For The Man,” a fast tempoed anthem to the struggles of the working man, dealing with the bossman demands to “Get your fingers out your ass/Pump some faggot’s gas/Some asshole down on needs a jump.”

And the curio “I Saw Gener Cryin’ In His Sleep” which has Dean re-telling a moment when he finds his brother crying while sleeping. In between the shitty guitar solo and an even worse whistling solo, lies some sage advice where Dean tells listeners to block the bad shit out of your head because “When it’s time for bed/You shouldn’t think about such stuff.”

Pure Guava is probably a quarter-hour too long and riddled with too many inconsistencies for it to qualify as necessary listening. But if there’s a part of you that enjoys an examination of juvenile humor, audio experiments and too many bong hits, then Pure Guava may serve as a welcomed reprieve to “playin’ it off legit” with your milquetoast reality.