Samuel Locke Ward - Where The Sick Go To Die 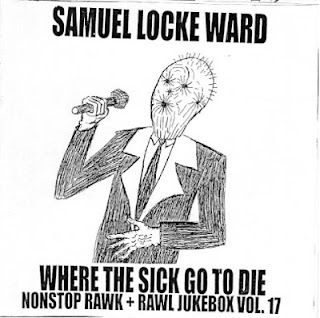 “Running with scissors/Put shit in the food” begins Samuel Locke Ward’s Where The Sick Go To Die, his 18 song collection from 2009. The song is nothing more than a list of fuck-ups, an anthem of apathy that SLW seemingly subscribes to, setting the tone for another release of low expectations and even lower self-esteem.

“Put water in the gas/And fire to the woods” he continues before imploring listeners with a chorus of screaming “Do it wrong,” three words that could serve as his mantra in a world were SLW releases “records” at an alarming rate and with even more alarming consistency.

Think of this artist’s prodigious output as a defense mechanism, something that’s less a result of some manic urge (like Daniel Johnston) or satisfying some insatiable muse. Instead, it’s a distraction, attempting to hide the fact that Samuel Lock Ward desperately wants you to like him, and chances are if he throws enough shit at you, something will stick and you’ll either smile, laugh, or hum the chorus along with him.

It’s frustrating at times, because within his low-fi chaos are some very good tunes and untapped potential, something that I’m sure S.L.W. cares very little about or has little interest in pursuing. Instead, the assembly line release schedule makes it difficult to keep up to speed and hard to appreciate every bit of available material completely.

And while it’s not my place to advise an artist to slow down or consider a much needed editor, I can only remind myself and others that Samuel Locke Ward is doing it while I’m doing little more than reporting on what he’s doing.

Where The Sick Go To Die is a gem in the same sense that a BeDazzler will turn your clothing into a jewel filled piece of clothing that gets less impressive the closer you examine it. The aforementioned “Do It Wrong” is unquestionably awesome, while “18 Candles” is a remarkable character study of unchecked entitlement, more than SLW probably even realizes.

“Just blew out 18 candles” Ward deadpans, before admitting “18 more than I can handle” in mock admission. It sucks getting old, but it is pretty awesome to be able to figure out how utterly ridiculous the youth can be with their incessant need for instant gratification and narcissistic attitudes.

The same can probably be said for SLW at times, like the lazy couplet “Let me bake you a cake/by the lake/With a rake/Oh what a lovely day” (“May I Lead You Astray”) or any of the frequent inside jokes that line the track listings of Where The Sick Go To Die. They cheapen its effectiveness, albeit slightly as Locke Ward’s uncanny pop sensibility and unwavering need to document every musical ejaculate that leaves his body can make for some strangely enjoyable moments.

Like the five-song closer, beginning with “The Stupid King” and ending with what ends up being the record’s highlight. With a decidedly primitive electronic rhythm and repetitive three-chord verses, “Pomp + Unfortunate Living” provides Where The Sick Go To Die with some of SLW’s most emotive moments with lines like “Wasted youth on bitter rainclouds.” It’s an earnest attempt at making Where The Sick Go To Die more than just another self-indulgent mess that could probably be found in any city that counts a public university as its primary employer. It hints that, beyond the liberal arts support group that coddles him, lies a musician that could actually breathe life into the a community that has a history of lo-fi jokers with more time on their hands than actual talent.

Samuel Locke Ward demonstrates that his talent is quite abundant, but his time would be better served in making sure his music is considered beyond his primary caregivers.