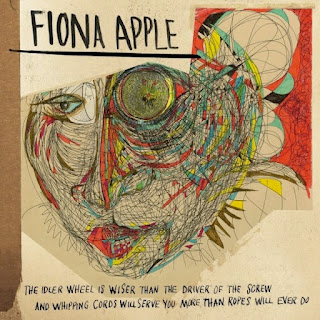 What makes The Idler Wheel work in ways that completely surpass Fiona Apple’s previous trio of releases is how the stark production perfectly blends against the album’s deep exorcisms. This is a heavy record, more so than the limited instrumentation would initially suggest, but within those moments of quiet space and avoidance of clutter, you can hear every ounce of inner turmoil in Apple’s words. And even if you’re not the lyrical type, you can clearly hear that aforementioned turmoil in her open-heart delivery.

The Idler Wheel neglects any attempt of pop accessibility, which is fine as the record’s weight would just topple over trying to polish up a record of such blatant malaise. Instead, Apple just occupies the space with little more than her piano and her nearly frightening vocals. It had to be this way. Fiona is now in her mid-30’s, and as she’s apparently hinting at with all of this is how she’s looking at having to tackle the pressures of life alone.

“How can I ask anyone to love me/When all I do is beg to be left alone” she asks, knowing all too well that her inner struggle may indeed be to blame for not being able to resolving that aforementioned struggle. In the course of the song’s nearly 5 minutes, you hear Apple wail, feel the words delivered against clinched teeth, until at the very end you can hear her voice trail off in a defeated whine. The only thing the listener can hope for is that the last 5 minutes have offered some kind of cathartic release to help push ahead some sort of resolution.

Besides voice and piano, The Idler Wheel is moved forward with nothing more than hand clapped rhythms, found items, and in the case of “Periphery,” footsteps marching on gravel and sand. Apple doesn’t stay still to wallow in her depression. Instead, she marches on. “Hot Knife,” the album’s closer and potential high-point, contradicts the rest of the album’s bittersweet journey with its nifty acapella vocals and cannibal drums.

Its placement is important as it leaves listeners with the impression that Apple will probably end up in this very same place again someday soon, because love tends to make you forget about all of those red flags that pop up along the way, on route to your next breakup. Make no mistake about it, The Idler Wheel is indeed a breakup album, perhaps one of the most intricate, passionate, and deeply personal ones ever committed to tape. It does so with utmost maturity, hitting hard at the creeps that have left her in a lurch as well as fully realizing that she’s no picnic either.

It’s a heavy album, for sure, but one where you can help but admire her unwavering vision for it and how it’s primary sound is pure emotion. “Nothing wrong when a song ends in a minor key” she tells us in “Werewolf,” and after several repeated listening to The Idler Wheel, you can’t help but agree. No one told us that life would be easy, but Apple has created a record that makes those low moments of dread into an intriguing collage of creativity that ends up being the artist’s first indisputable masterpiece.