Choking On The Ashes Of The Inevitable: 20 Years After The Death Of Kurt Cobain

For 20 years, I knew this day was coming.

It was foreshadowed on April 8, 1994, my "official" date of the death of Kurt Cobain - the day they found his body laying on its back on the second floor in the greenhouse of his 171 Lake Washington Boulevard residence.

This is the day that I recognize the death of Kurt Cobain.

I'm serious. One of the things I remember about that date was how weird it would be revisiting it twenty years later. At that time, it would have been a little over twenty years since the death of Janis, Jim and Jimi. I don't exactly remember those dates, so the only death I could really compare it to was the death of John Lennon as both seemed to provide me with an overwhelming sense of sadness. And while I was despondent over the murder of John Lennon, I clearly remember my sadness being mixed with heavy amounts of anger at the news of Kurt Cobain.

I was working in small market radio and having a great time. Part of that happiness was due to Nirvana. They had turned a very formulaic format into infinite possibilities, and it was a great time to be a part of that. For my money, 1991/92 would stand out as one of the high points of the rock and roll timeline, ranking next to such infamous dates as 1967 or 1977. It was our moment, and maybe that's why it's hard to look back on it now.

Cobain had  been missing for several days at this point, and  the rumors of a suicide attempt in Rome were prevalent. I had  purchased a bootleg CD called Roma that documented a live performance from around this time. The music was obviously from a soundboard recording as the fidelity is great and even the performance - recorded on February 22, 1994 - is surprisingly stellar considering he was just a few weeks away from his first suicide attempt and just a few weeks more away from his eventual execution of it.

An author with a very limited vocabulary penned  a few paragraphs about the band's notorious struggles during the first few months of 1994. "A near fatal accident in Rome has brought our the vultures hungry for a corpse" wrote the uncredited author, before adding a few swipes at  Eddie Vedder and soliciting sympathy for Kurt, Courtney Love and the other members of Nirvana. "It's going to take a lot more than this to knock down Nirvana's wall" continued the brief declaration, unaware that the wall was just about to be demolished with a quick shotgun blast to the head.

A representative from Elektra Records had called me and told me the news. I was in my office, obvious to the events. I went to the news room and began to scour the AP wire for information. "A body has been discovered at  the residence of Kurt Cobain" began the initial results. By the time of the start of my 2:00 pm airshift, the body was confirmed as Cobain's. I started every hour of my airshift with a Nirvana song and dutifully reported the news at any available break.

I heard the afternoon's news person talking to someone in the newsroom. "What an asshole! Committing suicide when there's a baby involved. How selfish!" It was hard to argue, yet hard to accept. This was the first musician of my generation that I explicitly related to, and the first one to explicitly disappoint me. I went into the room off of the station's studio where we kept a shitload of vinyl singles for years past and cried while "All Apologies" played. The news person came in and brought back all of the commercial carts that were used for her top of the hour news broadcast. She noticed that I was crying in the other room and seemed to understand that the words I heard her say moments before were probably left unsaid, given the circumstances.

I had semi-broken up with my girlfriend at the time, as she had taken a job close to the Minnesota border and moved out of our apartment. I moved back into my parent's home for a temporary residence, the entire event serving as an end to the salad days of my radio career, Cobain's suicide then serving as an exclamation point to its finish.

The event served as a clarion call to end any youthful aspirations of music, broadcasting, or anything related to the industry of both. I began to lift myself out of my limited economic resources and fell into a "straight" job where I began to earn a legitimate living, later realizing that the decision came at a price. I put the Nirvana records away and made little attempts to revisit them.

After my airshift that night, I went home to my parent's house. My mother had heard the news and quietly approached me in their sunroom as I watched the live MTV News feed of the suicide. "I'm sorry that the singer of the band you liked died" she offered. "I know you were a big fan."

That weekend, I drove the five hours up to my ex-girlfriend's place and we watched the ongoing reports of Cobain's death on MTV. She cried continually and this bothered me as she was initially dismissive of Nirvana and chastised my enthusiastic support of them.

Everyone is entitled to a chance to change, I suppose, so I kept my own callous opinions about what I considered to be her carpetbagging support to myself. We had seen Nirvana perform in a basketball gymnasium just months prior, and now that event would be sealed with his death. I relayed how the phone lines at the radio station lit up when school let out from lots of kids calling in to confirm the news. She began to cry again.

Months later, we went and saw Hole play at First Avenue in Minneapolis. Looking back, it served as our own funeral of sorts for Cobain as well as an end to our relationship. The day after the show was the last time I ever saw her. In another example of my own about-face, I later hooked up with the news reporter that was initially so verbal about her thoughts on Cobain's death. We married a few years later in Las Vegas with an Elvis impersonator officiating.

Even though my life is light-years away from that moment 20 years ago, I remember the event vividly. Coming into 2014, I was reminded that today would be coming, and I avoided acknowledging the subject until now and the inevitable articles that commemorate the event.

Nirvana being inducted into the Rock and Roll Hall of Fame?

Instead of looking back on this day of Cobain's violent conclusion, I'd like to discuss why no band has been able to tap into the same level of cultural significance as Nirvana did even though two decades have come and gone.

Or maybe Cobain's shotgun ended that notion along with his life as well.
Written by Todd Totale No comments: 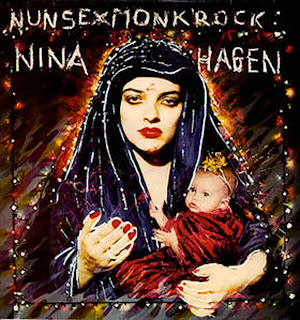 Released in 1982 - the same year as Kate Bush's landmark album The Dreaming was issued - Nina Hagen's Nunsexmonkrock is probably best described as the crazy German cousin of that Bush offering. It is a widely epic statement that uses genres as its personal bitch, executed by an artist with a stunning, non-traditional vocal range that bounces between terror and beauty in seconds.

And it starts that way with the very first song, "Antiworld," featuring tribal drums beats and Middle Eastern tones, all while Hagen bounces off reverberated versions of herself-each one a demonic and terrifying force. Compared to The Dreaming's opener "Sat In Your Lap," Hagen gets the nod for straight up intimidation. It's unlike anything you've ever heard, and it's the first song on the fucking album.

Cut two "Smack Jack" begins with polite early 80's rhythms and it sucks you into its familiar spaces of synthesizers and cleanly strummed guitars. All good until Hagen begins singing like an elderly Eastern European Jewish grandmother with throat cancer and possessed by the devil. She howls underneath in another overdubbed voice and by the chorus she speeds up the tempo to a gallop and begins screaming "Shoot it  up, smack jack!" It's incredible drama, and even Hagen agrees with yet another voice appearing from the corners with the observation, "Junkies...are very sentimental."

"Taitschi-Tarot" channels Yoko Ono excercises quite nicely as thoughts on reincarnation. It leads into Hagen's tip-toes into the heavy metal arena with wails that are an octive higher than Maiden's Bruce Dickenson and run right next to an opera Hagen that's dubbed on top of the whole mess.

By the end  of Nunsexmonkrock, we've been professionally introduced to her infant daughter Cosma Shiva Hagen, an array of childlike voices, an eerie male demon, and five minutes on the subject of UFOs ("You are not alone!! Remember, it's true!!") underneath a mechanical syncopated beat.

Yes, Nunsexmonkrock can be an overwhelming barrage of voices, noises, and genres all lobbed together in a package that questions both Hagen's sanity and her own place in the world of recorded music. Because, quite honestly, the only other person I can think of who's accomplished this level of uncompromising music has a last name of Beefheart or Ubu. Shouldn't we be placing Hagen in the same breath?

Nunsexmonkrock makes a great case that we should.

"1968 is over!" Hagen reminds us, before screaming "Future is Now!" and some thirty years later, it still hasn't arrived, even when the spaceshit can be found right in the grooves of this warped masterpiece.