I Miss The Comfort In Being Sad

It's snowing here, and the casual Xanax hangover has brought an urge to sleep again. Either that, or the bullshit reality of working once more in a bullshit position doing the same bullshit that I was doing nine years ago. This ain't what Lennon meant when he sang about ""Starting Over" and Jack Douglas isn't producing my life. But then again, he got assassinated shortly after "Double Fantasy," so I must count the proverbial blessings.
Which gets me to thinking about the Nirvana box set, a purchase that I have yet to acquire. It seems like just a few years ago, but in reality was almost a lifetime away, when radio was ripe with mediocrity and a little power-trio from Washington got Killdozer's producer to clean up their Jack Endino garage sounds and make an undisputed classic called "Nevermind." Working at a Top 40 radio station at the time, a co-worker and friend exclaimed "You should add it!" when we discovered that DGC records would be releasing "Smells Like Teen Spirit" as a single. The song was incredible, and it was ours. "No fucking way that thing will ever take off." was my honest reply. It did, of course; we added it at the station three weeks later. And the world turned on its hair metal axis.... 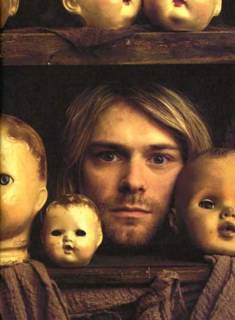 So glorious a ruckus and so much a "spokesman" for my generation, I related to Kurt but not in a weird Carpenters "Superstar" kind of way. I liked the idea that someone my age from a blue collar small town who wrote honest songs and played guitar poorly got famous. And the lesson of this story is that rock stars with lots of raw talent and a Mosrite guitar end up with a shotgun wound in a seldom used room of their home.
I came to work at the radio station and started my day. The traffic director paged my office phone and said that Tracy from Elektra Records was holding for me on line one. It wasn't an "add day," meaning that I wasn't expecting phone calls from record companies. But Tracy and I had a nice, personal relationship and so I took the call.
"Have you heard the news yet?" She asked, noticeably upset.
"No. What happened?"
"Oh Todd...They found a body at Kurt's place in Seattle and they think it's him."
Kurt had been missing for a few days and the theory was that he was using again. But her demeanor hinted that it was more than simply an overdose, and when pressed she admitted to not knowing much more than a male body and a shotgun found next to it. She was crying. I didn't know what to think. This man was not a relative, and I didn't know why a sense of panic filled me.
"I've got to go see what's going on, Tracy." I said.
"Call me later." she said. "Are you going to be Ok, Todd?"
Nobody had asked me that in a long time, death or otherwise.
I went to the newsroom and had the news director pull all of the automatic A.P. news feeds that were starting to litter his floor. It was there that I read in chronological order the entire events of April 8, 1994. There was no official word on who was found in Seattle that morning, but most of us understood it was him. The violent nature of his action was something that took me entirely off guard.
I did my part. I read the news. I played the songs. I announced the tragedy. I fielded the phone calls. And when I finally was able to put things in perspective, ironically as I played the lies that housed a chorus of "And I swear that I don't have a gun," I began to feel the emotions of that day. I retreated into the music library and starting to cry for a guy who just fronted a band. It was the first time since John Lennon's death that I had done such a thing. These tears were different, because he was supposed to speak for me somehow, and instead, the selfish fuck took the easy way out. I looked out of the music library window and noticed how gray that April afternoon had become. The afternoon news announcer burst into the control room and noticed me crying. She apologized for the interruption and asked if I was ok. What was different from her concern as apposed to Tracy's earlier inquiry was the fact that the news announcer was verbally offering her two cents on how "stupid" Kurt was for killing himself and leaving his child without a father. True, but she didn't seem to understand that part of his allure was his emotional fragility and the loud/soft=Janov/Lennon therapy of his output. Her uneducated comments angered me. She later became my wife, and I always resented her for the actions she displayed on that day.
Afterwards, I went home to my parents house having recently moved home after splitting with my then-girlfriend. She initially had her own opinions about Kurt too, declaring that he didn't appreciate his fans very much because he was flipping the bird in the "Nevermind" insert photo. Two weeks after Kurt's death, she was replaying his memorial for me and silently weeping next to me on the couch. A tad melodramatic for someone who earlier declared him to be such an ungrateful prick. I guess you could say I was resentful about that too.
My Mother could sense that this front man actually meant something to me and treated me with kid gloves when I made it home.
"I'm sorry about what happened with that Kurt Cobain." she offered.
"I heard about it on the news and I know you really liked him."
I went to the back room of my parent's house and watched MTV report on the suicide of Kurt Cobain. Kurt Loder was talking with David Fricke and, for a brief moment, it seemed that MTV actually understood it had an obligation to do something other than make money. Then came the copies of the suicide note filled with tiny writing, sentences sloping downwards, and words scratched out from last minute edits. A perfectionist all the way until the trigger was pulled.
I couldn't listen to Nirvana much after that. It felt wrong and it perhaps was too real for me to take. I always believed what he was writing, but his violent end suddenly made everything bold-type and personal. I continued to purchase the obligatory posthumous releases only to watch them collect dust. There's a part of me that wants to run out and purchase the new Nirvana box set, but there's the bigger part of me that understands it won't be something I play after the initial spin. There's no amount of demo material, home recording, or unreleased track that will make me understand more than I already know or want to be reminded of.
Written by Todd Totale No comments: