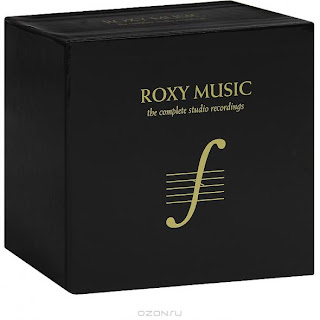 A few years ago, I named Bryan Ferry’s release as worthy enough to receive the Roxy Music moniker. The argument went that the Roxy personnel all took part in its creation (including Brian Eno) so why not just used the brand name?

I had a chance to review that brand recently, thanks to the newly issued Roxy Music box set, The Complete Studio Recordings 1972 – 1982. And while I still would have no trouble with calling Olympia a Roxy Music album, the new box set has provided me with a renewed appreciation of why Ferry decided to leave well enough alone, because what they accomplished during their 8 studio records is already better than “well enough.”

The Complete Studio Recordings 1972 – 1982 is a ten-disc collection of those eight records, with the additional two housing the band’s debut single (“Virginia Plain” may be worth the price of admission alone), their b-sides, and the endless mixes and remixes that were all of the Avalon singles.

Since we’ve already seen Roxy Music’s catalog reissued with the allure of re-mastered mixes, and since The Thrill Of It All had already served as a boxed compendium, why would anyone need to revisit the band in another career overview?

For me, it was a matter of simple mathematics. Having not gotten beyond a well worn, first generation cd of Avalon (that after a well-worn vinyl version from the friends at Columbia House) and some equally hissy copies of a few other titles, I knew that I’d eventually need to find a home for every single Roxy release. The new box set is priced low enough to hit everything at once.

That sticker price gets every release the full reproduction gatefold sleeves and, perhaps more importantly considering our trend on the loudness wars, a completely tinker-free mix of the recordings themselves.

This set represents the original mixes-for better or worse in some cases-with no hint of compression or eq’ing. That’s important when dealing with a band like Roxy Music, who seemed completely focused on their attention to detail..

“For worse” would be the awful mix that hindered the debut, to the point where Bryan Ferry himself wanted to redo the entire album for years after, because of the record’s unforgiving mix. They got better-as in remarkably better-on the follow-up For Your Pleasure, which finds Ferry exerting his dominance over Eno in the band’s arrangements.

In fact, For Your Pleasure not only shows the band to continue to grow without the aid of Eno’s input, it also finds them growing better as his role diminished. For Your Pleasure secures the band’s place in history even as their sophomore offering, and it’s just one of many discoveries that I found from The Complete Studio Recordings.
There’s two other must have releases, featured in their original and intended mixes that are, without question, deserving of everyone’s record collection: Siren and Avalon. Each effort shows the band in periods of enviable growth and brimming confidence. All three records taken in once again show a band perfectly adaptable at reinventing themselves, seemingly without sounding as if they were even setting out to do exactly that. They stumble into the career building moments with such ease that it makes the entire Eno departure feel like a necessary decision that allowed the band to become as great as they were.

But the real treat with The Complete Studio Recordings is re-examining Roxy Music’s other records, which pale only because that aforementioned trio of essential records shine so brightly.

I remembered being drawn to Country Life as a teenager, most assuredly for its risqué cover and confirmation of Bryan Ferry’s prowess as a ladies man. I am now drawn to it entirely from its content inside. It is a collection of consistent growth, finding the band very comfortable with their fashion and abilities as musicians. This is the sound of a band working hard at their craft, while donning a business casual clothing sense during the rehearsal time.

By Manifesto! the band is acting the part of royal statesmen while Flesh + Blood-a personal favorite that’s much maligned by others outside of the Roxy faithful-begins to show signs of a new subgenre, one whose name doesn’t even exist.

I understand the complaints of how Flesh + Blood is nothing more than a tepid return from a lengthy (by 1980 standards) hiatus, but for me it sounds like a victory lab before unleashing what would become the band’s signature opus, Avalon.

Avalon benefits the most from the 2012 mix as it leaves the record’s rich texture and subtle dynamics in tact, a rare feat during a time when most re-issues are met with a tradition of mixing records of some note to cater to the thin fidelity of today’s earbud generation.

The Complete Studio Recordings 1972 – 1982 hints at a much different era. It reflects a time when bands were given a wide birth in order to grow and develop. It also demonstrates how this freedom can actually lend itself to fostering an environment where a band can become great on its own, through natural selection and just plain old stubbornness.

It is a necessary document of the band’s legacy and consistency, one that’s needed not only out of the duty that’s created from their influence, but for the sheer enjoyment of listening to a band grow, develop, and become great.

What makes it such a requirement is how it shows that Roxy managed to do that not just once or twice, but for at least three of titles included with this collection. And to be able to achieve this in the span of a decade makes this box set not only complete, but completely essential.