Living In The Past

Jethro Tull. What the fuck? Can anyone possibly like these guys? I mean, they rank pretty fucking low on the cool meter and it’s hard to remember a time in which they were ever cool. But they were once. And I tolerate them.
These unshaved English minstrels pooh-poohed around hard rock in the late 60’s and, from what I’ve been told, were second to The Who during The Rolling Stones’ “Rock & Roll Circus.” I wouldn’t know, because I’ve never seen “Rock & Roll Circus” and, prior to Tull’s “Living In The Past” single, I know jack squat about Jethro Tull.
For some reason, “Living In The Past” b/w “Christmas Song” entered into my singles collection when it was originally released. I thought the flute sounded cool, but consider that even a fart sound pretty cool to a 6 year old. I liked the b-side of the single too because Ian Anderson references Santa at the end of it. To a 6 year old, Santa’s pretty fucking cool too.
The following year, Jethro Tull’s “A Passion Play” made its way into my album collection. The artwork was cool: a ballerina bleeding from the mouth graced the black and white cover art while a more appropriate one graced the back sleeve. The gatefold album opened to reveal a mock play program guide. One figures that this was to represent the actual performance of a passion play. 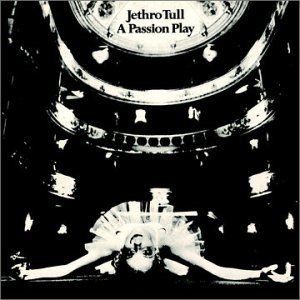 When one finally gets around to playing the one track album (literally, if you don’t include the “intermission” piece) they’ll find that there is very little tying this album together. Occasionally, you’ll hear a word about “acting,” “passion,” “play,” and combinations of the last two words, but that’s really all a listener has when looking for some linear meaning. And when you approach “A Passion Play” with any attempt at linear thought, you’ll walk away from it considering the effort to be one of the most worthless albums ever cut.
Consider approaching it instead with no expectations and with an eye on execution. When I do this, I find “A Passion Play” to be a work of extreme curiosity and intricate performances. Essentially, there are different songs within the one track structure of the album, but they’re segmented affairs filled with lyrics like “the ice cream lady wet her drawers to see you in the passion play.” It’s as if Ian and company simply threw some lyrics together without any idea that maybe they should review and possibly rewrite some passages after they worked out the musical arrangements.
And there’s where the album really takes off. The men of Tull pull out some incredible musical chops on the album, with total disregard for the fact that all of the rehearsal time would be spent on accompanying a piece that would be universally panned upon release.
For a young boy, that kind of highbrow criticism was lost. I knew Dylan wrote some strange words at that age, so it was totally acceptable for me to hear the lines:
“And your little sister's immaculate virginity wings away on the bony shoulders of a young horse named George who stole surreptitiously into her geography revision. (The examining body examined her body.)”
Plus it had the interlude “The Hare That Lost His Spectacles.” This is a fucking children’s story placed smack dab in the middle of the rockin’! As a child, it was cool. As an adult, it was annoying…until I picked up the cd re-issue of “A Passion Play” and saw the promotional clip for the “song” that was included on the cd. Its trippy Alice In Wonderland meets Winnie The Pooh is refreshingly bad and nicely dated to 1973.
Apparently, there is an actual story to the album. There is a guy who dies, he’s taken to a viewing room to revisit moments in his life, he’s sent to Heaven, doesn’t like it, sent to Hell, doesn’t like that either, so the fucker is reborn again. Got it? Fuck it, just nod like a retard and agree “the rain only gets in sometimes and the sun never leaves you alone” is a pretty clever line, even when you’re not baked. 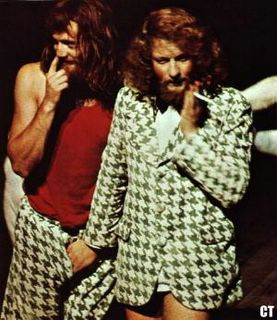 The album made enough of an impact on me to explore Jethro Tull further with the albums “Heavy Horses” and “Songs From The Wood.” Both of these albums were purchased on 8-track and have not been replaced digitally. I did throw down some cash for a Tull comeback album of sorts called “Broadsword And The Beast” or something, but the album sucked and I sold it back to the record store a few weeks later. It must have been bad enough for me to even avoid some of Tull’s more popular moments, or I must have finally grown up enough to realize that they were an uncool band to continue supporting.
But fuck that shit: I actually like “A Passion Play.” I love the pretentiousness of it, I love the grandeur of nothing, and I love guys that wear overalls when they rock. Seriously, every dude in Jethro Tull looks like a farmer down the road in Iowa. I’ll grant you that the farmer’s probably growing organic foods and weed at his farm, but he is a man of the earth nonetheless.
Probably my biggest respect now comes from the fact that at their core, J.T. is a band firmly entrenched in England’s musical roots. And as uncool as that looks or sounds, it’s pretty cool that some hippies stumbled on to the idea and were able to make a pretty successful career out of it. 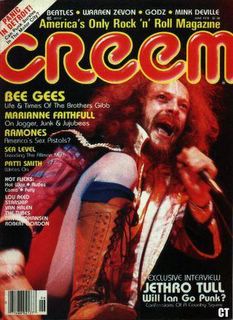 Did Ian go punk? Fuck that shit, Ian didn’t even go disco. He did go a little overboard with the “A” album where he starts the thing as an overdue solo album, but then realizes there’s more money to be made on a Jethro Tull tour than an Ian Anderson one. The only notoriety they seemed to get during the 80’s was a “Best Heavy Metal” award at the Grammy’s and they only won that because half of the voting committee had heard of them.
For the past 15 years, Tull has pretty much stuck to a compilation album every three years followed by the occasional memory lane tour. I’m sure that they’ve released a few original titles during this time, but name me a rock station that plays them. Like other progressive sorts, theirs is only pursued by hardcore fans, glanced at by novices, and ignored by children who now know John Fogerty was once on The Wiggles. A musical retard would also add that the drummer for Crowded House, who just committed suicide, also had a recurring role on that God-forsaken children’s show.
Anyway, for all of you musical elitist who constantly bag on the Tull: I completely understand and will even provide you with stones to throw. But when we’re done talking about how pretentious a progressive rock band can be, I’ll throw in “A Passion Play” to remind myself how innocent even the most overreaching band can be when listened through child’s ears.
Written by Todd Totale No comments:

To The Paramedic Who Saved Nikki Sixx

AC/DC released the DVD “Family Jewels” this past week; a collection of rare television footage, promotional clips, and shitty 80’s videos. Yes it’s true: you can now own the entire “Fly On The Wall” video again in a handy digital format. The good news is that the discs are broken up into two sections, one for Bon Scott and the other for Brian “There’s a bowling pin in my anus” Johnson. By the end of disc two, you’re ready to knock that silly hat off of Brian’s head and scream “What the fuck is with all that shit after “Flick Of The Switch?” Or if you’re like my S.L.F., you’re going “Oi! Oi! Oi!” (like in “T.N.T.”) by the time they hit the “Highway To Hell” clips. Yes it’s true; I had to explain why it’s cool that every single AC/DC song sounds the same. And again, don’t get me started on “Mr. Metronome” Phil Rudd… 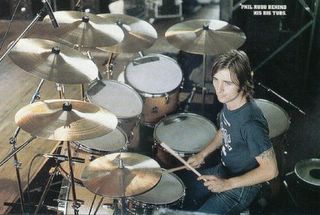 I would be remiss in mentioning that I broke down and bought Motley Crue's “Shout At The Devil” last week and will again declare that it’s a good album, but it definitely is not the “classic” album that those money fuckers want you to believe. I had forgotten how utterly bad some of those songs were (pointless version of “Helter Skelter,” album fillers “God Bless The Children Of The Beast” and “In The Beginning”) and how retarded Nikki Sixx could be as a lyricist. Let’s take a closer look at the song “Bastard.”
At first, you’d think the song is about a dude that pisses off Nikki so much that he declares “consider that bastard dead!” What’s confusing is the line that follows:
“Get on your knees
Please beg me, please
You’re the king of the sleaze
Don’t you try to rape me”
So is Nikki afraid the dude is going to fuck him and, in order to save his masculinity, has to kill him? It’s shit like this that prevents “Shout At The Devil” from being anywhere near a landmark release.
To top this shit off, there’s a recent interview with Mick Mars who basically admits he thought the whole make-up and metal thing was retarded but that, essentially, he was getting old and wanted to be famous. I guess his shitty bar band from the 70’s wasn’t paying the bills for Mick, his wife and children, so he took the Crue route. Trust me when I say “shitty bar band;” I’ve heard songs from his old band and I can say “shitty” with conviction. I guess Mick really wanted to be a blues guys, yet even after making some jack with Vince, Neil, and Tommy, still has yet to produce anything that refers to his love of the genre. It’s what they call “selling out” and it’s something that these fuckers have known about all along.
I will be fair in saying “Shout At The Devil,” “Danger,” “Looks That Kill” and “Knock ‘Em Dead Kid” all rock nicely, but I’m having a hard time with the entire “It’s a big deal that we’ve reunited for the fans” bullshit that Sixx seems to be pumping out with as much fervor as his “I almost died from an overdose!” sound bite.
Shout at the devil…and ask for a higher guarantee on tour.
Written by Todd Totale No comments: