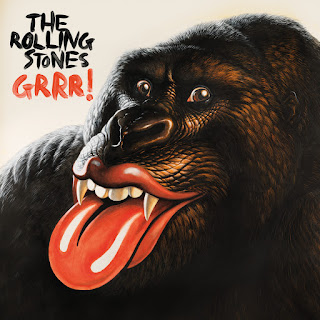 A half-century is nothing to sneeze at, so if the Stones want to peddle out yet another compilation of the most remembered moments of their catalog, then let ‘em. If anything, it’s kind of hard to fuck up a retrospective that pulls from five friggin’ decades of material, even if you have to cherry pick from the titles from Undercover on.

The cover art is a hoot and the punchy earbud mix that Grrr! provides listeners actually works wonders on the early material. For real: I dialed up the new mix of “The Last Time” and followed it with an older mono version and was amazed at how great Charlie sounded and how ballsy Bill Wyman’s fuzz bass really was on that track.

Yes, Grrr! is pretty pointless for any devoted Stones fan that already has these tracks, in multiple formats if you’re a sucker like me or a silly completists. And besides, no self-serving Stones fan is going to tolerate the edited versions that are presented.

The two new cuts, “Doom and Gloom” and “One More Shot,” are standard-issue Stones songs that are much better than the newbies included with their last retrospective, Forty Licks. For some reason one of those cuts, the awful “Don’t Stop,” makes another appearance here.

In fact, most of the band’s later material on Grrr! reeks more of obligation than essential evidence of the band’s prowess. You will think of more suitable replacements for every “Harlem Shuffle” or “Anybody Seen My Baby,” but you’ll also marvel at how far you’ve traveled before mediocrity settles in.
Written by Todd Totale