I ignored pretty much all of 2005. After the 'W' got elected for a second term, I disconnected. I'm only now getting around to listening to N.P.R. again, if that tells you anything. And something started happening to my music taste, but I attribute this only to the current state of the union and not my impending fourth decade. Alas, some of you may feel the increase in accoustic guitar is a sign of M.O.R., but fuck off, I used to like Cat Stevens when I was younger too. Whatever the case, here's the infamous Baker's Dozen List for 2005: 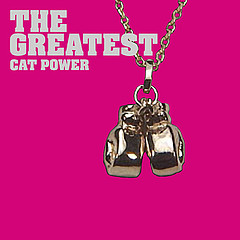 I’ve been holding on to this thing over a month now and I can’t really keep it to myself anymore. I’m talking about the upcoming Cat Power release The Greatest, schedule for official release in January. Being the obsessive Cat Power fan I acquired the leaked copy illegally, but rest assured, I plan on legally purchasing the album when it’s released. And not just because I’m an obsessive Cat Power fan; I’m purchasing it because it’s fucking awesome. As it stands, The Greatest is the best album of 2006, and the year hasn’t even begun yet.
For the album, Chan surrounded herself with accomplished and well-versed Memphis musicians who give it an unprecedented feel and sound. The Greatest finally provides Chan’s voice with a complementary backdrop and gives her, for the first time ever, some soul to share.
Marshall’s songs still bear the primitive feel of her earlier work. The arrangements roll alongside her, almost metaphorically like the Mississippi that borders Memphis. What’s strange is that this isn’t the first time she’s recorded in Memphis. Actually, Cat Power’s second album What Would The Community Think was recorded there. Stuart Sikes, who engineered that album (and who most recently mixed Loretta Lynn's "Van Lear Rose" release) returns to the Cat Power camp as the Producer for this release. The end result is not only Cat Power’s most polished record to date, it’s also her most comfortable sounding one.
Marshall starts the album with one of her best written songs, the title track “The Greatest.”
“Once I wanted to be the greatest
No wind or waterfall could stop me
And then came the rush of the flood
The stars at night turned you to dust”
This song sets the bar high for the entire album and throughout the record, she continually delivers and exceeds expectations. The Greatest is the album that us Cat Power fans have been waiting for and it finally demonstrates her talent completely. We no longer have to make excuses for her and we no longer have to explain the idiosyncrasies that have plagued her image and performances in the past. With every meltdown from now on, we have The Greatest to fall back on as a demonstration of what she can actually do with her talent with the right musicians and with the right formula.
Once again, but the arrangements provide her with subtle nuances that previous backing musicians haven’t been able to accomplish. Take The Dirty Three who backed her on Moon Pix. Their performances seemed to almost complement her depressive traits. This Memphis bunch, instead, bring a real depth to her emotions. From the light and somewhat joyous second track, “Could We,” Hi Records guitarist Teenie Hodges slinks along with the same effort as he did on the most famous song he helped compose, “Take Me To The River.”
They transform “Willie Deadwilder” (now titled as just “Willie”) into an airy stroll that knocks off about ten minutes from the original version on “Speaking For Trees.” While that original version brought tears to my eyes, there’s a strange sense of hope when she declares
“now my heart is a worried thing
memories are planted there
the seeds of the field
I now want to reap and sow.”
Sure, the words have been edited a tad, but the overall theme remains the same. It’s the effort of her Memphis band that transforms this song into something new, something extraordinary.
“Hate” revisits traditional Cat Power ground by using only a primitive strumming of Chan’s Danelectro guitar as the accompaniment. But because the track comes late in the disc, the impact of this song is more noticeable.
“Living Proof” manages to do something never accomplished before in Cat Power albums: it gets a little funky. “You’re supposed to have the answer/you’re supposed to have living proof” she says on the track, and the answer is The Greatest is the best Cat Power album yet and it should be referred to by music fans for years to come in the same way that we praised Dusty Springfield for making her own way to Memphis over 35 years ago. Let’s hope Chan doesn’t make the mistake that Dusty did and never return back to these surroundings that have obviously lit a spark to her muse and helped her talent truly flourish.
Written by Todd Totale No comments:

Bob Dylan-Live At The Gaslight 1962

Let’s get this straight: I’m more of a fan of Dylan’s “rock” period than his early “folk” period. I can appreciate his folk material and the recent Scorsese documentary makes me appreciate his early period even more. Capitalizing on that documentary, Columbia released the bootleg series’ “Volume 7.” Columbia did something even stranger this year by taking a much bootleg Dylan show from 1962, shining it up, and making it available only at Starbucks. There actually wasn’t much negative feedback for this marketing decision; less than Bobby’s decision to appear in a Victoria Secret commercial, actually. And as a fan of their grande soy white chocolate mocha, the marketing worked brilliantly as I grabbed the disc along with the coffee.
“Live At The Gaslight 1962” was reportedly one of the first bootlegged cds ever made (early versions of this performance were already in the hands of Dylanphiles by 1987). After the commercial failure of his debut album, Bob took his time crafting the follow-up (“Freewheeling”) and would often introduce new material to MacDougal Street faithful in small club like the Gaslight. Thankfully, a very resourceful audience member brought a tape recorder to a couple of Dylan’s Gaslight performances and captured the events. What Columbia has brought to us is a truncated version of these recordings; the real bootleg versions were longer. As it’s presented, “Live At The Gaslight 1962” contains only three Dylan originals, with the remaining seven being typical covers for Bob’s setlist at the time. 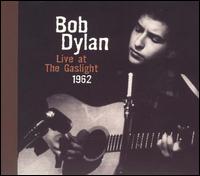 “Hard Rain,” appears in a fully realized version and, judging by the backing vocals provided by some members of the audience, it was a song that had been around for a while prior to the (maybe) October, 1962 recording date. “Rocks And Gravel,” although credited to Dylan, is merely a culmination of Brownie McGhee’s “Solid Road” and Leroy Carr’s “Alabama Woman Blues.” Track three, an early take on “Don’t Think Twice, It’s Alright” sounds exactly like it is: a (then) work in progress. With that perspective, it’s something else to hear Dylan “testing” out new material with audiences. But again, judging from the faithful that sing along to “Hard Rain,” it’s apparent that his crowd, even then, hangs on every word and understands they’re in the presence of someone truly special.
The rest of the album, all covers, also point to this. What’s remarkable is the age of Dylan vs. the delivery of the material. This doesn’t sound like the voice of a twenty-one year old. Bob carries such material credibly and sounds more assured than in some of his originals like “Don’t Think Twice.” “Moonshiner” sounds like a man knowing that drink will be his ultimate demise. “West Texas” sounds like a dust bowl relic. “Barbara Allen,” the best cover on the collection, sounds too gentle for a man of Dylan’s age and is more haunting than anything on his debut.
For a recording based entirely on primitive recording techniques, the sound of this “Gaslight” collection is clear and adequate. There’s just enough flaws for it to retain it’s bootleg mystique; some of the tracks start and end abruptly and the tape hiss of the recording source is noticeable. Considering the venue, the date of the recording, and how it was captured, the folks at Columbia did a good job of cleaning it up.
While his debut contained mostly covers, “Freewheelin” signaled the beginning of Dylan the songwriter, the transition from Robert Zimmerman the student into Bob Dylan the professor. “Live At The Gaslight 1962” provides us with a rare look at that transformation. And whatever the reason or your feelings of how this collection is made available, it’s worth the price of an overpriced coffee.
Written by Todd Totale No comments: