Pop Will Eat Itself - Now For A Feast 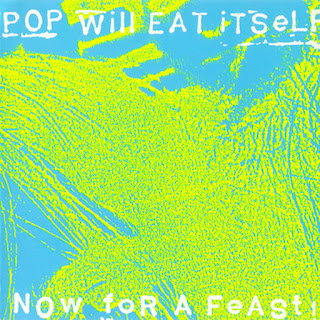 Evidently, there was a brief moment during the late 80’s when I was a supporter of the “Grebo” movement. I say this because I own records by The Wonder Stuff, Eat, and Pop Will Eat Itself. I don’t own anything by Ned’s Atomic Dustbin or Carter USM, but I’m familiar with their output as well.

All of this is revelatory to me, as I had never heard the term “Grebo” before tonight. It came during a vinyl excursion with Pop Will Eat Itself’s Now For A Feast, a 14-track collection of the band’s early extended plays.

I’ll save you the clicks and tell you that “Grebo” represents a very brief moment before grunge when a gaggle of bands from the Midlands of England with weird hair, second-hand chic, all began to weave garage rock into hip-hop beats with some novel results.

At least they were novel to me, and I’m man enough to admit that there’s probably a very good reason why you’ve never heard the term “Grebo” before right now. That reason is that it’s the equivalent to the brief musical boom in places like or or or or any other city of emphasis. The difference here is that it was over there and we’re to self-absorbed with ourselves here in to give a shit about what other countries are doing. Plus, geography just sounds gay.

What makes this subgenre even less intriguing is how utterly forgettable it is, and this is probably the most evident within the brief blast that is Now For A Feast! Clocking it at a mere 24 minutes, the compilation is over before you know it.

In between those 24 minutes are up-tempo pop tunes awash in buzz saw power chords and Johnny Ramone leftovers.

All of which are voiced by PWEI vocalist Grahamm Crabb, a man of limited ability behind the mic and pen. You’ll hear very little beyond his one-to-two note range, but with so little to say, you’ll appreciate that he’s not getting too worked up about the garbage in his notebook.

For “Candydiosis,” Crabb laments at how a few bands use the word “Candy” in their songs. He points out the Husker’s Candy Apple Grey album title and references Jesus & Mary Chain’s Psycho Candy, but the only thing that these irritants can muster in him is a half-assed chorus of “What’s so fucking good/What’s so fucking good about candy?” It’s delivered with such stale aggression that you wonder if the band was worried about getting their ass kicked, because they sure get their asses handed to them musically if you compare ‘em apples to apples. Candy, grey, or otherwise.

There are some brief moments of pleasure. There’s the cute l’il acknowledgement to their scene “Oh Grebo I Think I Love You,” a swell bit of garage stomp during the side-closing “Like An Angel,” and they even deconstruct Hawkwind’s “Orgone Accumulator” for good measure.

It worked enough for me to take notice when Pop Will Eat Itself released their follow-up album, this time taking on a much more industrial tone with plenty of nifty samples and big drum beats.

If it wasn’t the product of white dudes from , then maybe the hip-hop culture direction could have landed them enough credibility to be on the same page as the Beastie Boys.

They weren’t, and PWEI’s subsequent output is riddled with a dated sheen that easily points to its decade of relevance while managing to completely overlook the identity of its creators entirely.

All of this adds an extra layer of nostalgia to Now For A Feast, serving as a reminder to when Pop Will Eat Itself were a band of guitar fuel and rudimentary prose. Those warm feelings will dissipate just about as quickly as this compilation runs out and what you’re left with it a collection that’s more about snacking on the leftovers of the band’s much better influences than providing a decent spread of its own making.