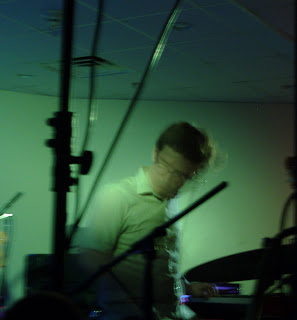 I don’t know if I’m sensing the pretention of Grinnell University before I even get there or if it’s just something that actually happens, but the feeling overtakes me and I automatically get me guard up every time I’ve been there.
It’s the entire “You spoiled little rich kids” feeling and yes, I’ve used the quote from Eddie & the Cruisers quote before, but that’s what I feel like saying each and every time I make my way on to their campus.
It’s their college-no question about it-and it’s a fine institution. I’d just like an acknowledgement of our state in some fashion-not just the clear-cutting that takes place when bright minds from around the world stop over to take advantage of the higher learning and then leave our fare state as soon as the diploma is in hand. I’m not suggesting that they stay here. I’m only wishing that they’d take a little bit of our state with them after they leave.
Shouldn’t that be part of the learning process too? 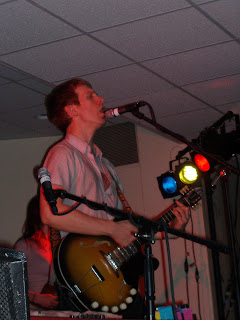 In the short amount of time that Wye Oak was here, I was flattered by lead vocalist Jenn Gardner’s words about Iowa. She’s from Baltimore, Maryland-a city that I actually want to visit some day-and I know so very little about that community. Here’s what I know: I know that the Baltimore Ravens are merely my Cleveland Browns in some hideous relocation that was an embarrassment to the NFL; I don’t recognize the current incarnation of the Cleveland Browns as they too are an embarrassment to the NFL. I also love the show The Wire which was based in Baltimore and it depicts the city into two very different areas: the refurbished East side and the volatile West side in which murder victims are placed in abandoned buildings, covered in lye, and left to decompose.
I’m sure that there’s more to Baltimore and I’m leaving out a huge part of the city, but until I get there, that’s as much as I can tell you.
Oh, and they have cheese steaks or crab cakes, I can’t remember which ones.
Wye Oak doesn’t sound like a Baltimore band, given those totally inaccurate perceptions, but I’m sure living there is a lot more challenging than it is here in Iowa-which is why I’m very prideful and appreciative of my state.
“I think if I lived here, I could become a better person.” Gardner said, in her heartfelt words about Iowa.
It’s true, the lack of everyday craziness can make you a better person. The less time you spend commuting does give you more time to spend with the kids, reading, listening to music, whatever. The dim and unimaginative call the state “boring,” and for a time growing up-in high school at least-it can come across that way. But as you get older, you realize it really isn’t. And you appreciate things more like a Shearwater/Wye Oak concert. 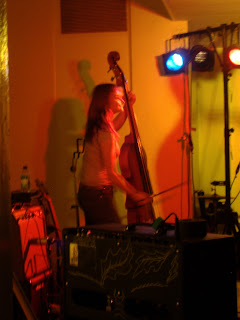 Which is why I was startled that so few attended the show. I didn’t expect a huge gathering, but I at least expected more than the three dozen that showed up last Wednesday. The last show at Grinnell that I saw was Spoon, and even that was nowhere near being sold out-but at least a couple hundred people showed up.
Even then, however, I felt that the cold ambivalence of snobbery was afoot in the crowd. Groups of people ignoring the music and gathering in a circle to talk and share wine. I mean, isn’t that something you could do in your dorm room? If this music is only a cursory part of your life, why not do others who regard it as important with the service of staying home?
They were there at the Shearwater/Wye Oak show-less so, but still there-dressing up as women to draw attention to themselves when the stage was full of way talented musicians that deserved better.
I’m exaggerating somewhat as the show was as intimate as you could imagine, but the point is that it fed into my perception of Grinnell and the students who attend there. These are the future? Our brightest? Our blue-blooded sons and daughters who will take their established names into another cycle of privileged? Weren’t they afforded the manners that is supposedly an intricate part of such wealthy upbringing?
And if not, couldn’t they use their time in our state to learn some of it? From, yes, those simpleton farmers and small-town folk who take their sweet time driving, eating, and getting to the point? 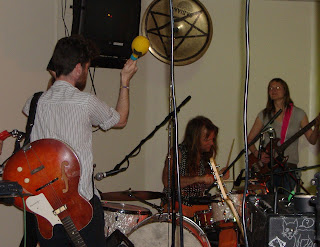 Maybe that’s the reason the show was so sparsely attended: both bands are notoriously meticulous in their execution that to witness it would be like playing a game of Risk with some farmer who thinks small talk is a discussion on future grain markets.
Whatever the case, all I can tell you was that my perception of Shearwater and Wye Oak was completely spot-on from what I’ve read and hear of each band.
And my perception of Grinnell College has not changed after the show either, and until I see otherwise, I don’t hold the students there in the high regard that they obviously hold themselves.

A full review of the show without the commentary of the university can be found at Glorious Noise. (link will follow when review is posted)
Written by Todd Totale

I've never even heard of these bands. How & where did you hear about them & what do they sound like?

Wye Oak from another Jason and Shearwater from the review stacks. Wye Oak is like a loud/soft moment of Yo La Tengo when Georgia sings. There's a tag for Shearwater to hear more on the right and probably some free MP3s at GloNo to download (search Shearwater). Like Spirit Of Eden Talk Talk-very grandious and epic with a bunch of bird references and emotive vocals. Palo Santos is amazing and their last two aren't shabby either.