Mountain Goats - The Life Of The World To Come 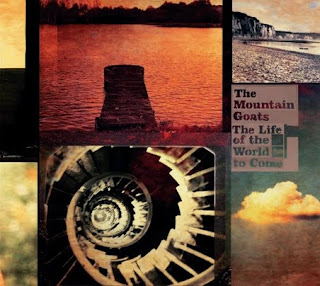 More religious than Songs The Lord Taught Us and halfway towards
“No Shit?” CCM territory, The Life Of The World To Come finds John Darnielle tip-toeing around religious topics without letting the gospel touch his pen.
This is spiritual music only in the sense that Darnielle is in the dumps and thinks religion as a way to add solemn tones to his songbook.
“1 Samuel 15:23” kicks Life Of The World off in fine fashion, if not for the blue-balls feeling you get at the end of the song’s tense four minutes. During that entire time-indeed, throughout the album-you get the feeling that something great is just about to take place. But it never does. The song exemplifies the rest of the album, most of it recreating a slow build only to have it get stuck on the way up to something memorable
“There’s more like me where I come from” he sings on “Samuel”, and boy, he ain’t foolin.
The album’s real concept isn’t religious-but human nature, as constructed in obtuse world play. It’ll hardly win over new converts, but The Life Of The World To Come won’t disappoint long-time fans who will discover hours of joy piecing together the narrative thread that binds this record.
Rightfully so: that cock-teasing potential of greatness does get incredibly close with side one closer “Genesis 30:3” which is going on a mix-tape sometime real fucking soon. Featuring only Darnielle and a piano, it ends up being one of the album’s most powerful moments despite the minimalism. The line “For several days the visitors were here” sounds like a message from God himself during this Thanksgiving break.
The other notably entry is the heartbreaking, cancer-vignette “Matthew 25:21.” What more can be said of a song that begins with “They hooked you up to a fentanyl drip, to mitigate the pain a little bit” and ends with “You were a presence full of light upon this Earth and I am a witness to your life and to its worth” other than the fact that John Darnielle hasn’t lost his ability to create jaw-dropping prose.
These moments are snuggied in between bits of flat up-tempo yawners and thinly arranged bits of religious pathos
“A kind and loving God won’t let my small ship run aground” he sings on “Romans 10:9” and there’s a certain amount of truth to that on The Life Of The World To Come. While Darnielle certainly hasn’t run aground with the latest Mountain Goats’ offering, the bible certainly didn’t steer him towards greatness.