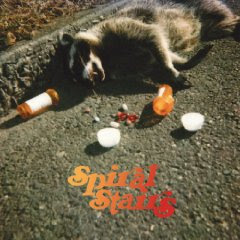 The worry for me is that the Pavement reunion will all but overshadow the new Spiral Stairs album, The Real Feel. Hopefully, the opposite will be true; all of the salvo might very well rekindle an interest in this, Spiral Stairs’ first proper solo album, and give it some much-deserved attention.
Call it the divorce album-an event that can be both a traumatic experience as well as an intensely creative one. I’m sure Scott Kannberg’s had his share of long nights conceiving this effort, but he should take solace in knowing that it’s produced such a rewarding record of both lyrical intimacy and musical therapy.
Where his more notorious Pavement lyricist may get the recognition for his written prose, give Stairs some credit for achieving some of the very same emotional level with the music he’s presenting here. It’s a strange blend of Aussie/Kiwi underground with an occasional foray into Crazy Horse territories. For all of the talk of how Stairs scored his marital disintegration with spins of Shoot Out The Lights and Rumors, there’s very little of those efforts within his own wall of guitars. If anything, there are hints of his former band within those chord progressions, pointing to how vital his contributions were to Pavement and how good of a player that he’s become since they disbanded.
The hints of his bruised heart are all over The Real Feel, but they’re not morose and they point to a healthy future. “What was wrong for you?” he asks repeatedly in “Wharf Hand Blues” before realizing “Might’ve been right for me.”
So how strange is it that-shortly after releasing the best album of his post-Pavement career and implementing a full steam ahead outlook-he’s now expected to regress a bit and revisit his past once again? I don’t know Kannberg’s feelings on the reunion, but there’s a big part of me that thinks Pavement ended on a high note and that they should leave it as such.
But now there’s something else that leads me think that a Pavement reunion is unnecessary. With The Real Feel, Spiral Stairs demonstrates that he can make incredibly vital music that stands up to Pavement’s finer moments. While no one will confuse it with the likes of Slanted & Enchanted or Brighten The Corners, listeners will be able to see a consistency at work (admittedly, not entirely present with Preston School of Industry’s output) and one that is deserving of re-launching the pseudonym.
To reunite the band may be a dream come true for some, but for my money, the re-emergence of Spiral Stairs with his first solo effort feels like the real thing.

On the bright side, he can get some extra exposure by selling copies of the record at merch booths on the Pavement reunion tour.