Pavement - Quarantine The Past: The Best Of Pavement 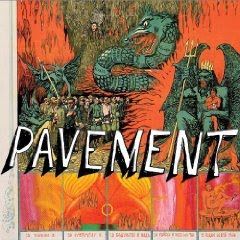 To call it a cash-in would be a bit of a disservice since 1.) nobody really buys cds anymore and 2.) those that still do are faced with diminishing floor space, so every cd that is on display seems to be a compilation out of necessity.
With that being said, I’m willing to bet that nearly everyone who is growing hard over this year’s Pavement reunion has every track on this “best of” compilation. The best of is in quotations because those very same fans are probably growling at the tracks that were left off Quarantine The Past.
For me, those songs would be “Starlings On The Slipstream, Silence Kid,” “Fame Throwa” and “Rattled By The Rush.”
What is included is a good representation of the band’s career from the low-fi years to the expanses of their late entry releases, all of which were handpicked by the band. Quarantine The Past is a fine, moderately priced cd that your girlfriend or uncool bro can pick up when they’re looking for a compendium of Pavement tracks to recognize on the reunion tour.
What the album doesn’t do is accurately tell the story of Pavement themselves, essentially an American rip-off of The Fall which happened to find more favor after they broke up than when they were a working unit. As they progressed, they turned into a decent rock band-more accessible than The Fall, that’s for sure-and they looked foxy enough to produce a nice contingent of female supporters, which was critical to their post-career adulation.
Because the record doesn’t fall into any chronological order, you miss the progression from lo-fi go-getters into Nigel Godrich produced demigods. On occasion, the track-by-track transitions can be startling because of this, and novices will find themselves cherry picking through the collection just like they bitched about when they had to pay for music.
A better suggestion would have been to separate the discs into two phases.
An even better suggestion would have been to never broken up at all, but then again, if they hadn’t we probably wouldn’t have seen the fervor that’s swirling around the reunion tour. Which would have made Quarantine The Past an obsolete idea, just like it probably is among the faithful already.