Mission Of Burma - The Sound The Speed The Light 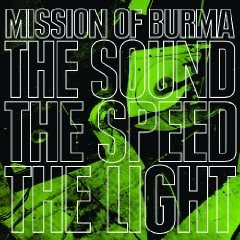 A few years ago, one of the members of Mission of Burma hinted that the band realistically had a few years left before calling it a day. The idea was that the style of music they play is such a sonic assault that it will become physically impossible for the members to perform.
The Sound The Speed The Light is the third album into MoB’s resurrection and it sounds like they’re performing with an eye towards the end along with a clear memory of how simple things were when they were just young kids discovering novel ways to damage their hearing.
It’s a frolicking effort for sure, but not without its share of flaws. For one, the lyrics on many of the songs seem filled with middle age contempt. On the dark anthem “1, 2, 3 Partyy!,” Clint Conley sounds like another head-shaking Dad with a very strange sense of what constitutes decadence (“There’s many men that smoke/But few that chew”).
He’s a lot more effective when he deals with matters of his age instead of observational musings on the younger people he’s undoubtedly seen during the last six years with this re-charged line-up. The nostalgic “SS83” and the closer “Slow Faucet” are winners, as is “Feed,” which sounds like the kind of song Conley was pursuing with his pre-MoB reunion outfit, Consonant.
But The Sound The Speed The Light isn’t Conley’s album-it’s guitarist Roger Miller’s and drummer Peter Prescott’s. Both members execute with such passion that it’s hard to stay mad at this record for very long. Prescott lays out what can only be described as a never ending fill-even during the album’s quieter passages-while Miller plays with such fury that it actually sounds like he’s trying to get tinnitus again before they hang up the overalls for good.
It may pale somewhat to The Obliterati, but The Sound The Speed The Light serves as important document in MoB’s catalog. It’s the album that manages to blend cantankerous middle age realities with the youthful exuberance of a stale rehearsal space.
If anything, there are no hints that the band is putting on the breaks at this point; there are no anthemic swan songs or meticulous farewells.
Admittedly, that day is sooner than later, but there’s something to be said about a band like Mission of Burma who not only feels the need to deliver another album of raucous brutality but who still has the chops to actually pull it off.