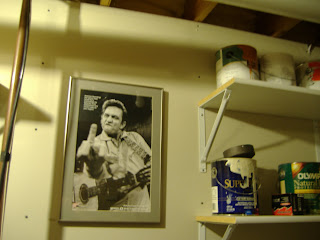 That’s a framed picture of Johnny Cash giving the bird. It’s on the wall in the storage room of my basement, a casualty of the kids, the in-laws, and of married life in general. You see, I was outvoted on keeping the picture out in public. If you’re asking “How were you outvoted?” then you’re obviously single.
The picture is a famous one, shot by Jim Marshall back in 1969 at San Quentin. Mr. Marshall is one of a handful of rock photographers that you’d probably recognize by name, but there’s even a greater probability that you’ve recognized his work.
My framed picture is from the infamous advertisement that ran in Billboard magazine after Johnny Cash won a Grammy Award for “Best Country Artist.” Of course, Country Radio stopped playing Johnny Cash decades ago, and his record company took a little swipe at those K-Garth stations with the caption “Johnny Cash and American Recordings would like to acknowledge the Nashville music establishment and country radio for their support.”
It gave me a chuckle, but the picture was even more memorable.
It’s easy to understand why.
I actually looked for one of Marshall’s prints of the photo, but balked at the price. I chose the Billboard ad as my second choice, saved a bundle while keeping the impact.
It’s just one of Marshall’s iconic shots, and it’s a shame that his shutter stopped today at the age of 74.
Maybe it’s time to move it the picture to a more prominent spot for a while, or at least until my wife sees it in the mancave.
Maybe not.
After all, the boy is reading at a rapid rate nowadays, and he finally noticed a Kozik print of a Flaming Lips/Butthole Surfers show and told on me.
I’m pretty sure he knows the middle finger is in the same ballpark as the word “butthole.”
Sorry Jim, but your Cash shot’s gonna stay in that storage room just a few years longer.
Written by Todd Totale

No matter where it hangs in your abode, the fact that it's on one of your walls is what counts. RIP, Jim Marshall.