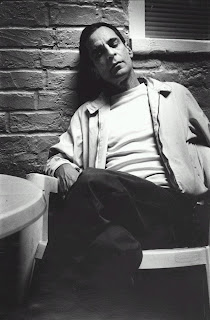 My sophomore year in college was the first year I discovered Alex Chilton. It was the The Replacements album Pleased To Meet Me and the tune was, of course, “Alex Chilton.”
From there it was just a short hop next door to a friend who happened to be recording Like Flies On Sherbert from another friend who endlessly provided us with all of the vinyl answers to our obscure rock questions.
And from there, it was just down the street to the radio station where we were playing Chilton’s High Priest.
Ironically, it wasn’t until a few years later that I was curious enough to learn more about Westerberg’s line “I never travel far without a little Big Star.” (Side note: I was at a party on a visit to my hometown during college break when a couple drunk high school chicks came in and properly took over the stereo. They had to play this awesome new song they just discovered and we were treated to a drunken karaoke version of “Alex Chilton.” I felt hope for the younger generations, even though technically they were only a few years younger than me.)
I started with the wrong Big Star album-Third/Sister Lovers-but loved it anyway. As a matter of fact, I was so used to the disjointed melodies of that third record that when I did end up moving to #1 Record and Radio City, it took several spins to get used to the perfect power-pop of those first two Big Star records.
And finally, I actually met Alex Chilton. My girlfriend and I were working at a radio station that sponsored a summer music festival. We were required to go on stage and introduce the bands. That year, I drew Molly Hatchet. My girlfriend drew the Rock & Roll Nostalgia show, featuring four acts. I remember that one of them was Question Mark-the image of his the tighty-whiteys protruding from his gold lame suit is permanently burnt in my mind forever.
Another performer was Alex Chilton.
He played all the Box Top hits; nothing from his solo albums and nothing from Big Star. The backing band played for all of the artists on the bill.
We waited back stage for him. And when he did make it to the dressing room, he didn't stay long. I asked him four incredibly stupid questions:
1.) How come you didn’t play any Big Star songs tonight?
“Because nobody came here to hear me play Big Star songs!”
2.) You could have played something from Like Flies On Sherbert! (not really a question, but a lame attempt to prove how hip I was to Chilton)
polite chuckle
3.) You ever keep in touch with Westerberg?
(Again, another attempt to appear hip. Notice how I didn’t use a first name?)
“No. I don’t really talk to him much.”
4.) How did it feel to have someone like Paul Westerberg write a song about you, man?
“It was nice…It was an honor.”
It wasn’t an interview, mind you, but then again it wasn’t a very good way to engage a legendary performer like Alex Chilton either. Just at that moment, his roadie/soundman/partner/whatever came in and they spoke in some form of code. My original thought was that they scored some pot or something-but in looking back, I think that he was merely acknowledging that he had gotten the cash for the gig and it was safe to get the fuck out of our little town.
I wish I would have spoken more respectfully to him, but I was young. And there’s no guarantee that he would have engaged with me in the way that I wanted him to. There are reports that Alex wasn’t the nicest guy in the world and there are even more reports that Alex had some challenges with the drink.
So it is with a bit of irony that he passed on Saint Patrick’s Day, a day known for drinking. Ironic, perhaps, but a shame none the less. Because the world should indeed never travel far without a little Big Star.
Written by Todd Totale

In the summer of 2000, Jon Auer and Ken Stringfellow came to NYC during an acoustic Posies tour. After the show, I chatted with Auer who informed me they'd be opening for Big Star in NOLA for New Year's Eve. I figured if by October I didn't have concrete plans for that evening, I'd fly down and make the show. I did.

The show was stellar. And despite Alex Chilton's mercurial reputation, he warmed up to the adoring audience early, going as far as performing "Auld Lang Syne" at the stroke of midnight and later stopping the show to tell some jokes while graciously acknowledging the fervent applause garnered throughout the set.

As the house lights went up, The Replacements' "Alex Chilton" came over the PA and filled the room with
its reminder to "never travel far / without a little Big Star." For those of us that a guiding Star brought from as far as Nashville, Athens and even New York, it was a lesson already well learned in advance.