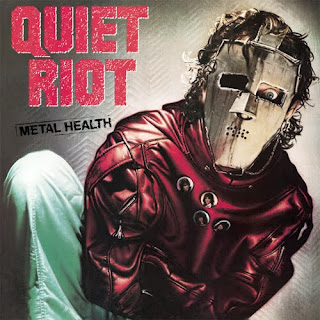 What people forget with Quiet Riot’s Metal Health album is that it is really the band’s third album. The band’s first two were only released in Japan and they featured a young Randy Rhoads on guitar, recorded before he was tapped as Ozzy’s lead guitarist.
Is there a reason why the band’s first two albums were overlooked in America?
You bet.
It’s because they sucked.
Quiet Riot was merely a mediocre band out of Southern California that pounded the circuit, honing their chops while they went nowhere. Their claim to fame was that their guitar player was awesome, and when provided with a chance to leave for greener pastures, he bolted.
This should have been it for the rest of the band, who were really a band only in name-Quiet Riot was vocalist Kevin DuBrow’s project-and five years after releasing Quiet Riot’s second album, he built a new band around the material he accumulated and viola: overnight success!
Metal Health may be the dumbest rock album ever to hit number one. At nearly every moment, DuBrow opens his big fucking mouth and utters something stupid, but he does it at such a consistent and overblown rate that you can’t help but think that he had little expectation that the album would make the impact that it eventually did.
By impact, I don’t mean that Metal Health was influential-hardly-it just means that the record ended up in nearly every teenager’s collection after the summer of 1983. The moment that Quiet Riot-scratch that, Kevin DuBrow-began taking himself way too seriously is the moment that their career took a quick slide into irrelevance.
Let’s be clear, there’s not a chance in hell that the band would have a lengthy career at the top of the charts, but in looking at the rise in hair metal after Metal Health’s success, you have to wonder if they could have had a couple of additional big ticket releases afterwards.
They didn’t, so the band was left with only one chart topper and a career of county fair and club dates to milk off of it.
Side one is positively flawless. It features the enviable title track that encouraged a nation of pimple-faced kids to “bang your head” and then encouraged them to seek out a little known hard-rock band from England called Slade with their cover of “Cum On Feel The Noize.”
The band covers themselves with II’s only decent moment “Slick Black Cadillac,” pretends to be all sensitive with “Don’t Want To Let You Go” and then begins to show a bit of musicianship with “Love’s A Bitch” before DuBrow before utters “Love’s got me by the ass again” and ruins the entire mood.
Side 2 is more of the same; DuBrow continually yaps at every available moment, aside from the 90 seconds or so that he gives guitarist Carlos Cavazo for the solo “Battle Axe.” It doesn’t matter much as Cavazo is a very one-dimensional player with a limited palate and a monochromatic barking tone.
There is one hint at a greater range with “Thunderbird,” a tribute to the deceased former member (Rhoads) who, ultimately, got the band a record deal after the tragedy of his passing spread across the music print landscape. Suddenly, DuBrow found himself with an offer-provided that he change his line-up’s name from “DuBrow” to the band name he had when Rhoads was performing with him.
Metal Health essentially gives DuBrow his closest brush with his Humble Pie worship, but he fails miserably at capturing that band’s soulful subtlety, thinking instead that his swagger can get away with such shit like “Wanna kiss your lips/Not the ones on your face.”
It’s embarrassing, for sure, but Metal Health’s fuck-all attitude makes it easy to understand why it became as successful as it did and a guilty pleasure that sounds better with each passing beer.
Written by Todd Totale

Yes, it's all true, and I couldn't agree more. Sadly, I must say that I allowed myself to be influenced by the radio brainwashing that was the result of “Metal Health” and “Cum on Feel the Noize” playing every 20 minutes (good God, there had to be some big time payola involved there). Not influenced enough to actually buy the album, but enough to steal the album from someone who thought they were cool for having it. Too bad for him, anyone that coach Lyons calls “Schmidt” could never be cool, certainly not like the one they called “Killer.” But for all their stupidity Quiet Riot did give me one thing -- the opportunity to see Axe blow them off the Burlington Memorial Auditorium stage for the price of a $24 concert ticket. Oops, don’t book an opening band that's better than your 10 song playing piece of shit band, Mr. DuBrow. Come on Todd T, surely you would have paid $24 for that also, hmmmmmm.

All you're doing is prompting him to go on another tangent about Axe, something that he's done enough on this blog already. Now watch, he'll probably do a review of that QR/Axe show that you speak of and I'll bet he'll share an update or two about Killer if you call him directly.

it really seems like you do nothing but moan about your miserable childhood, you piece of a lowlife. Cry me a river for fucking 24 bucks. Actually, you're a fucking pretentious flatulent who tries to scorn every Quiet Riot move. Your vantage point of view sucks a black and white mic stand.

Instead of debunking try harder to think where would you end up without hair metal decade. In a make-up shit of Kiss or other disco crap.

One-dimension is up your ass buddy. This is a remarkable and distinctive style, and thus it is so, it can be distinguished amidst other crap like your Axe.

Refrain from contempt or it eat you up eventually.

Actually Axe was a good band. So was Quiet Riot. This reviewer is not so good. A fuckin moron in fact.