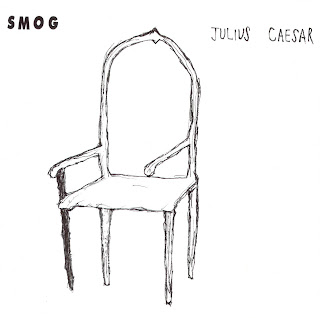 In my view, there’s a fine line between genius and mental illness

Sometimes that line is so grey that you’re never quite sure which side the artist falls on.

Such is the case with Bill Callahan, who released records early on in his career under the moniker Smog.
You never really knew if Callahan was this hopeless savant or just hopelessly misunderstood, using any bits of recording technology just to give voice to his internal issues.

Julius Caesar became my first record of Callahan’s-or Smog as the title suggests-and it came on my radar after the Flaming Lips covered his “Chosen One” song that’s found on this low-fi masterpiece. They went over the entire Callahan/Smog storyline prior to tackling what would be one of many compositions that document Bill’s penchant for heartbreak, depression, and poor choices in women.

Callahan uses his acoustic guitar primarily, strumming out rudimentary chords on barely tuned guitars. The percussion could be a hand against the hollowbody, a handclap or a spare primitive drum kit that he seems incapable of playing effectively.

For “I Am Star Wars!” he does an old trick that I used to do: hitting the “repeat” button on the cd player, forming a rhythmic pattern with the Rolling Stones “Honky Tonk Woman.” Almost twenty years later, it appears the legal team of the Stones has yet to find out about this infraction. He does the same thing with Prince’s “Sexy MF” at the end of “Connections.”

He also incorporates another technique on “When The Power Goes Out,” stealing groceries from the grocery store when they lose power. And like Callahan, the lifted items were for a good cause: a single mother.

Unfortunately, most of Callahan’s lady friends don’t seem to share in his generosity or endless romanticism.  His voice is defeated, his ideal woman continually diminished by reality, and yet he continues to be attracted to the flawed women that send him in a downward spiral.

“She said I could do it without protection…and that’s not a woman at all” he declares on “What Kind Of Angel,” succinctly documenting the entire AIDS paranoia that many singles had the “pleasure” of dealing with during the late 80’s/early 90’s, just about the same time our collective hormones and sexual freedom came to fruition.  He’s endlessly seeking an angel, but all he can find is “an angel of death.”

Another relationship proves to be with an unavailable woman who eventually pairs up with someone else. Bill keeps his disappointment to himself, but vows “I’m gonna be drunk… so drunk… at your wedding.”
Julius Caesar ends with the appropriately titled “Stick In The Mud” where Callahan finally admits “There’s nothing that I’d rather see than for you to fail. Evidently, it’s the best that he can muster in his passive/aggressive approach with these wrong women, but what’s even better is that he’s allowed these failed relationships paint a stunning record of emotional quality that supersedes any low production quality where his heart lies in pieces among the distortion and hiss of that protective magnetic tape.
Written by Todd Totale