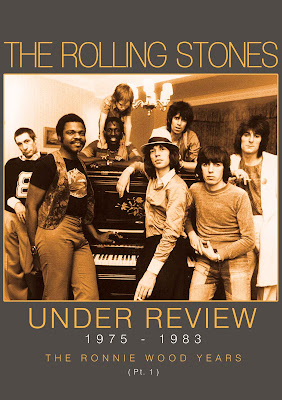 A new DVD documentary is scheduled before the holiday season, focusing on the Rolling Stones' last phase, one where Ronnie Wood makes the "no duh" transition into the Stones camp. While it's certainly the most sporadic of the Stones illustrious career in terms of quality, it is an era that I look back fondly on, as it was when the Stones linear movement matched by own coming of age.

There was the time when I yelled at my mother for opening my bedroom door unexpectedly, knocking a music stand on to my turntable, fatally scratching side two of Some Girls.

There was the time when my best friend and I got drunk, grabbed a few tennis rackets, and went to the Eagles Club where a weekend teenage dance was taking place. We requested a bunch of Rolling Stones songs and when they played them, we used the tennis rackets as guitars. I played Keith Richards while my best friend played Ron Wood. On the (then) recent concert film Let's Spend The Night Together.

During that movie, Ronnie Wood takes off running for some reason. He heads backstage and then comes back on stage on the other side. My friend mirrored this action by hauling ass in the middle of the dance floor at the Eagles Club, promptly running into a girl right as he was gathering a full head of steam. That was the power of "Start Me Up" workin'.

There was the slightly provocative notes that my girlfriend and I would pass each other in the halls from time to time, quoting the naughty bits on Undercover and suggesting that we would employ similar strategies.

There was the time I got really high before meeting my parents at a Rolling Stones concert (Steel Wheels tour) and then convincing them that I knew of a shortcut that would take us directly to the interstate. It was in  that state of mind when I discovered that "Frontage Road" was not a main thoroughfare that made its way through towns, but a brief access road that provided access to local businesses.

At this same show, I saw my father glare at a dude in the row ahead of us for lighting up a joint. It made me feel embarassed because, well, it's only rock and roll.

There was another Rolling Stones concert that I took a date to. I smiled at her when Mick sang "I want to fuck your sweet ass" during "Sparks Will Fly."

These are the moments that make the Ronnie Wood years full of memories, but none of them are represented in the new documentary.

An in-depth documentary covering the career and music of the Rolling Stones between 1975 and 1983. By the end of 1974 all was not well in the camp of the group tagged 'the greatest rock n' roll band in the world'. Their last two records had received little in the way of critical acclaim, the co-songwriters and main players had drifted far apart and in one notable quarter heroin addiction was rife. So when the man who had, for the previous five years, often been seen as the ensemble's anchor announced his resignation, many fans wondered if the game was all but up for The Rolling Stones. But those of little faith had no further need to fret once Ronald David Wood, formerly of the much loved but shambolic Faces, plugged his Fender Strat into the Stones' PA, having been offered, to rapturous acceptance, the coveted position formerly occupied by Mick Taylor, and before him, the late Brian Jones. Ronnie's arrival seemed to breathe new life into the band and their next pair of albums - the funky Black & Blue and new-wave-meets-disco Some Girls - were generally considered their best since Exile on Main Street. And as the 70s wore on and the 1980s dawned, while the records they released and the shows they played certainly had their detractors, glorious moments were always close at hand. This documentary film covers the Stones' career and music between 1975 and 1983 and includes archive and exclusive interviews, contributions from the finest experts and writers, and rare and classic footage, all soundtracked by the music that, despite it all , remained 'only rock 'n' roll..............'