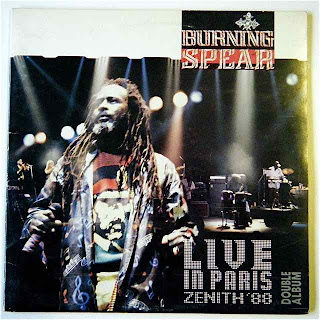 The song “Marcus Garvey” taken from some Island
Records compilation was my first introduction to Burning Spear, but its impact was great enough to seek out the Spear’s latest release at the time, which was the double Live In Zenith ’88. The idea was that a live effort would encompass a complete career overview-which it does to an extent-but it instead only fueled a desire to seek out more Spear, specifically the highly regarded mid 70’s output released on Island.

The appeal for me is hard to explain; Winston Rodney possesses a unique voice, but certainly one that isn’t that impressive in terms of style or range. What I can tell you is that there’s something inherently honest about it. The phrasing suggests something of a higher calling at stake, which is exactly right when you consider how many mantra’s this man has devoted to his hero, Marcus Garvey, and his religion, Rastafarism.

While not as immediate as his first live release, 1977’s Live, 1988’s Live In Paris Zenith ’88 finds Rodney as more of a respected elder of reggae music, one of the last remnants of the genre’s prolific and vital watershed releases from the previous decade where everyone seemed to incorporate a reggae style in their own material, and for some, going as far as to start careers from the impact of the genre.

From day one, Burning Spear existed out of Rodney’s spirituality, and it’s still in clear focus on Live In Paris with his frequent exclamations of “Rastafarai!” and use of repeated phrasing, almost as if Rodney is trying to evoke the spirits on stage for the crowd to behold and worship.

His band is top notch, tight, and very professional, giving Rodney full reign of the stage to unleash an almost larger than life character that the French crowd seems to respect and revere based on their recorded reactions.

Live In Paris Zenith ’88 also seemed to serve as the beginning of Rodney’s resurgence (he signed to Island’s Mango subdivision afterwards and even offered a great rendition of the Grateful Dead’s “Estimated Prophet” for a Dead tribute album) which came in the wake of this notable release which earned him his third Grammy nomination.

“You cannot kill this lion!” Rodney is known to declare, and on Live in Zenith ’88, he is clearly demonstrating that he is still the king of the jungle.