Here's the skinny on the new Pissed Jeans album:


Pissed Jeans will release their stellar fourth album, Honeys, on CD, LP, and digitally through Sub Pop Records on February 12, 2013.

The album, which features the single “Bathroom Laughter,” along with stand-outs “Health Plan,” “Loubs,” “Vain in Costume,” and “Teenage Adult,” was recorded by Grammy-nominated producer Alex Newport at Milkboy Studios in Philadelphia. Please find a full track list below.

SPIN, who spoke with Pissed Jeans’ singer Matt Korvette about the recording of Honeys, raved: “Listeners will have the opportunity to take in yet another electrifying helping of Korvette’s very distinct, some might say sobering, dispatches from beyond the cubicle to address both ‘crippling pet allergies’ (‘Cathouse’), a ‘blistering fear of going to the doctor’ (‘Health Plan’) and more…Honeys is arguably their most muscular and direct effort yet…”

Pitchfork premiered the first single, the aforementioned “Bathroom Laughter” as a “Best New Track,” and said, “…the rage boils over in typical fashion on leadoff track ‘Bathroom Laughter.’ It isn't easy to ascertain, exactly, what has captured the animus of Mr. Korvette this time around, as the band rips through an impossibly scuzzy, breakneck punk romp that reimagines previous single ‘False Jesii Pt. 2’ hopped up on gas station coffee” 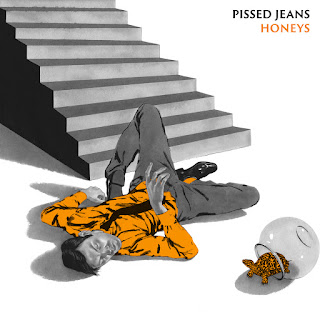 The songs on Honeys are direct without being obtuse, evocative without being vague, and personal without being indulgent. They also rock like nobody's business. Do yourself a favor and forget all the claptrap you've heard about other bands delivering the goods. If you want bloodthirsty, you’ve got it… Sean McGuiness makes other rock drummers look like one of those dimwit longhairs with an involuntary smile playing a bongo by himself on the lawn behind a store that sells rain sticks. With a bass that bass that sounds like a train filled with stolen shopping carts crashing into an orchestra pit, Randy Huth doesn't waste a note. Bradley Fry doesn't look like a guitar hero; he looks a nice guy who would volunteer to help you reformat the drive on your laptop. But if he looked like he sounds he'd be wearing a necklace of human heads and even his reflection would turn you to stone. Matt Korvette screams out observations on the tedium and absurdity of adulthood, delivered in a fashion similar to the way people must sound when being waterboarded. Sometimes the band sounds like hearing yourself being bashed over the head with a snow shovel… (read more at Sub Pop).