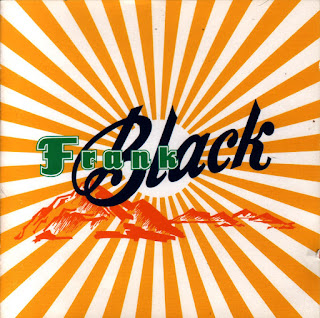 The most favorable thing about Frank Black’s debut solo album is that it doesn’t stray too far from where the Pixies last offering, Trompe le Monde. Maybe that’s why people such as myself got more hot and bothered with The Breeders’ early efforts because they actually presented something different when compared to Kim Deal’s former band, and that difference was surprisingly well exececuted.

Not that Black is any slouch, but we came to expect great things from the guy that composed the vast majority of all those Pixies songs that we just beginning to lament.

I suppose you could complain at the lack of diversity with Frank Black, but why bother. There was a real possibility that Black was going to break out into the mainstream, and that possibility seemed to allude him with The Pixies. If it ain’t broke, don’t fix it and just let the muse sneak out a hit or two, but I’d be hard pressed to find it here.

“,” the great opener here, came the closest, with its full scale video and extra promotional push that’s usually provided to a critical darling that’s just about to test the waters alone. With the drums way up in the mix and guitars punching out of every speaker, there was a chance that this song could have taken off, but like many good songs in the age of grunge, it was not meant to be.

“Hang On To Your Ego” is a telling cover as newly recruited keyboardist Eric Drew Feldman came from Pere Ubu, a band who’s frontman (David Thomas) was a huge Beach Boys fan and would often incorporate an occasional nod or line into one of that band’s originals. Feldman gives Black a wide birth, but all Frank can do is play it legitimately and with respect.

But rock radio and its fans weren’t interested in old Beach Boy tunes at the time, which makes cuts like “Fu Manchu” and the awesome “Parry The Wind High, Low” such great possibilities. Even the Ramones worshipping “I Heard Ramona Sing” cut got buried after Elektra cut the gravy train to any more singles, leaving Frank Black to wallow in obscurity, becoming nothing more than an interesting curio for those seeking out the output of the post-Pixies creative forces.