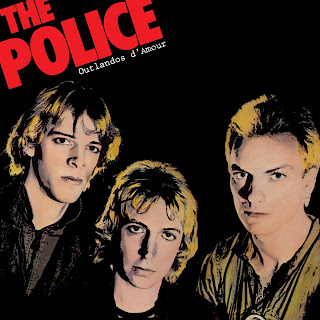 They say that band’s first records tend to be appropriate forecasters of how decent they will become. After all, the theory suggests that a band has their whole life to work on their debut album, paving the way for the “sophomore slump” and the frightening prospect of a new direction for record number three.

With that being said, one would expect The Police’s debut effort, Outlandos d’Amour to be something of an important moment. Their legacy was affirmed through their music, the band’s natural leader has enjoyed the coveted one name only status, and the songs they left us resonate well after the years when they were active.

Outlandos d’Amour doesn’t show any of this. At all. There isn’t one song out of the ten within it that would qualify as a stand-alone classic. It was the band’s growing catalog of great material that suddenly brought the additional focus to their debut and with that added exposure the nods to the obvious highpoints (“Roxanne,” “Can’t Stand Losing You” “Next To You”).

Great songs, for sure, but if the band ceased to exist after this first record-a distinct possibility given this rock era’s legacy of one-and-done bands, and given the members mutual hatred of each other-would we give as much attention to this late 70’s gem as we do now, thanks to the enormous wake that records like Ghosts In The Machine and Synchronicity provided it.

Fuck no. And let’s not forget that Outlandos has some really lazy material on it. I mean “Masoko Tanga?” What the fuck?! You can’t just record a nifty little jam you threw down at a rehearsal and get to call it a song, do you?!

While we’re at it, let’s also admit that “Be My Girl-Sally” is just godawful. Sting brings a song to the table, which is essentially just a chorus repeated over and over, while guitarist Andy Summers writes a completely un-amusing tale about a blow up doll, failing to recall that Roxy Music opened and closed the door on that shit with the invincible “In Every Dream Home A Heartache.”

As a matter of fact, side two of Outlandos is pretty much all filler, aside from the killer opener.

Side 1 is where it’s at, and it’s a tight race from start to finish. Yep, even the Stewart Copeland co-penned “Peanuts” stands out as one of the most punk rock songs the band ever committed to wax. But does that suggest that punk was even in the band’s radar at this point in their early career? Hardly. Even “Peanuts” ends up being about Rod Stewart, and for anyone who immediately remembers Sting’s pairing with old Rod (and “Waking Up The Neighbors” ) should immediately erase any further speculation about the band’s punk rock credentials. Hell, Summers was in the Animals, for christsakes!

That alone should point out how fortunate this Frankenstein of a band was to hear something within these very tentative first offerings and say “We can be better.”

They were. With every album. And I would agree that they ended with their most accomplished effort.

The elements were here within Outlandos d’Amour, but they certainly weren’t heard yet.
Written by Todd Totale