David Bowie - The Next Day 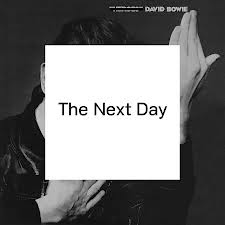 It has been ten years since the last David Bowie album, a distance that was pronounced enough that I paused for some personal reflection. It was the kind of reflection that ends up putting an entire decade into perspective, a vast journey that seems forever ago, but feels like it just happened yesterday.

The record was Reality. It’s an album that I’d recommend, with the disclaimer that much of its appeal for me is based on very personal associations. I’ll save the specifics for a proper review.

If you’ll recall, the fears of a retirement were valid considering had a heart attack towards the end of the run of the massive supporting tour for Reality. It would have been a tragic end to a career influential beyond words. Reality may be a decent late career offering, but it certainly isn’t one that’s worthy of being the last studio statement of a hugely vital catalog.

For me, reality was a crumbling marriage. When Reality was initially released, the façade of my marriage was still in tact. By the time the Reality tour was wrapping up, I had quit my managerial job of eight years, separated from my wife shortly afterwards and then proceeded to spent a good deal of time living out a suitcase.

Luckily, that suitcase ended up in the parking lot of an arena where stopped for a show. The concert was great, but the therapeutic quality of the event itself made the entire a personal milestone for me.

Reality meant it was time to move on.

Ten years later, I’m married again. It’s a better fit. Two children take up a large portion of my life, and both are blessed with a love for music, even if it’s not quite up to my standards. For example, neither of them have any idea who David Bowie is, or show any desire to learn anything about him. A connection was made when they discovered that they both know the words to a song (“Changes”) thanks to the placement of it in one of their animated movies they watch.

The way music is consumed is vastly different from the year that Reality was released. In fact, one of the complaints about the new David Bowie record was how unnecessary it really was. Music circa 2013 is single-driven. To suggest that anyone wants to listen to an entire album is presumptuous.

Before a note was heard, he was already being chastised for failing to recognize that nobody cares about a new David Bowie record. Suddenly, a man who was always considered to be part of pop culture’s cutting edge was now showing his age by sticking by a format seen as passé to the “experts” of such matters. A new record would be met with the requisite attention and then fall by the wayside. Unless a cash cow greatest hits tour is in the works and the Labyrinth dude sings “Fame,” then we all need to get over this David Bowie obsession.

The ammunition grew larger after the languid lead-off single “Where Are We Now?” was released to an unsuspecting audience on ’s 66th birthday. This hugely underwhelming teaser also did little to ease the collective sigh of disappointment that came with the “No more tour, probably forever” announcement.

The seeds of discontent firmly entrenched, the next shock came with the first images of the cover of David Bowie’s twenty-forth record. It’s a controversial repackaging of 1978’s Heroes, the title crossed out and David’s stoic pose covered with a white box. In the middle of the white space, the words “The Next Day” identify this sacrilegious piece.

It would be a struggle, wrestling with the fear that The Next Day would be as pointless as the indicators suggested, verses the loyalty that one possesses with an artist of this caliber.

Suddenly, a savior appeared. Its form came in a video, a format that certainly has experience with, but with no network to support an outlet for such an endeavor, what exactly is the point?

The point is this: the video for “The Stars (Are Out Tonight)” is a stunner. I sat in awe the first time I saw it, from a YouTube stream of the video while at a friend’s, each one of us in minor states of inebriation where David Bowie videos become points of strange occurrences and mild hallucinations.

In fact, a quick burst of N2O had me floating in a most peculiar way, and the next thing I know, it was time to leave the capsule and promise an imaginary Bowie-head that I would indeed purchase The Next Day on the first day of its release.

It just so happens that this purchase happened to be the vinyl version, which just saw the light of day last week-about three weeks after the album’s true release date.

The decision was more of an appreciation of the cover art. As controversial as it is, it’s a remarkably bold decision. I wanted the bigger package to absorb the artist’s choice, and I’m wonderfully taken by the gatefold layout.

I also love the way The Next Day is sequenced. The record has purpose and varying stages of high and low tides. “Where Are We Now?” for example, is positioned as the first song of side two-a critical position, and one where the song suddenly takes on a different role, it’s themes more detailed and prevalent. It now ranks as one of my favorite songs on the record, a huge turn from my initial reaction of ambivalence.

In case you’re wondering, the three additional tracks tacked on to the end of the vinyl version are noticeably of lesser quality than the rest of the record. They sound completely out of place in terms of the sequencing, but I have a strong suspicion that any one of the trio (“So She,” “Plan” and “I’ll Take You There”) would get picked out in a line-up, no matter where these also-rans ended up in the order.
Beyond these leftovers, the traditional sequence of the 14-song album is wonderful, but it’s more pronounced and it reflects The Next Day’s consistency much better.

The Next Day is the best record since whenever. There are notable commercial moments (“Boss Of Me” “Valentine’s Day”) that provide pop music with some much needed cleverness. There are hints of David’s era (“Dirty Boys” “Love Is Lost”) while other cuts touch on different creative peaks. With that being said, this is firmly a late-career product-themes of time and age flow throughout the record-that works very hard at making sure the self-reflection that ten years can provide were duly noted and properly executed.

The record is warm, inviting, and a little uncomfortable in certain moments. The dirge “Heat” ends the record, with a particularly haunting refrain of “My father ran the prison.” It’s unsettling enough to warrant an additional listen, and with each one a new reason to rank The Next Day as a golden years milestone becomes apparent.

In short, I’m glad that I survived the last ten years to see another David Bowie record, and it’s good enough to hope the next one comes a bit sooner.
Written by Todd Totale