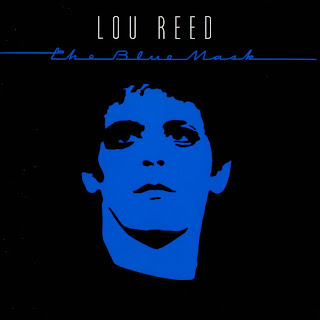 I wouldn’t say that my group of friends in high school was excited about the prospect of a new Lou Reed album, but the praise that The Blue Mask received in Rolling Stone magazine certainly got our attention. It wasn’t every day where the mag gave an album 5 stars.

That high praise got a friend of mine to march down to the record store in the mall and fork over the money for Lou’s comeback album.

The reality was that this “comeback” merely meant the artist fulfilled his contract with Arista and found himself back at the same label that supposedly was so bad that he unleashed Metal Machine Music on them. The Blue Mask was Reeds first record for RCA in a long time, and it actually sounded like he may have offered them something of worth. Whether or not The Blue Mask is truly the “return to form” that so many Reedophiles consider it as is another matter entirely, but let me get back to my friend’s immediate reaction to it shortly after opening up the shrink wrap.

Keep in mind that he’s probably around 18 at the time-a senior in high school-and I’m a lowly freshman at the sheltered age of 15.

Less than a week after buying it, my friend calls with an update and is obviously very critical of this record. He begins making whining noises, mewling on about how Reed is turning into a sad, old baby-boomer who’s still hung up on Camelot and pretending to go straight, as the title to one song (“Average Guy”) suggests.
My friend offers me the copy for The Blue Mask for $2, a huge discount from what he originally paid for it not less than seven days prior. He was that insistent on getting rid of the record and I was one that simply could not pass up such a bargain.

There must have been something that those critics in Rolling Stone knew that my friend simply didn’t.

It was the first of many lapses in judgment regarding the magazine’s critical perspective.

Admittedly, for years I coddled this record, repeating the misconception that The Blue Mask was indeed worthy of Reed’s most undisputed work. I understand now-after years of follow-up spins and considerations-that most of my own opinion is tainted by the low, re-purchase price I was provided, and the fact that the $2 spent on The Blue Mask purchased two incredibly good Lou Reed songs, “The Gun” and the title track, “The Blue Mask.”

You should go to ITunes or some other digital outlet and fork over the two bones that it takes to acquire those awesome entries.

You can forget about the rest of The Blue Mask and you can ignore any claims to the contrary that his 1982 release is anything but another half-assed creative statement.

Sure, Reed picks up his guitar with much gusto and he sounds very inspired at certain points, but when you compare “Coming of Age Lou” against “Coming of Middle Age Lou” you suddenly begin to notice a stunning revelation: Even aging cultural icons can get unwittingly boring as the year’s progress.

Saunders offers up incredible proficient readings through an incredibly irritating fretless bass, that farts, burps, and gloats through Reed’s placid take on settling down. Guitarist Robert Quine also makes an appearance here, which is admittedly the only thing that saves The Blue Mask from another release that’s truly worthy of anger and ridicule. His playing is near brilliant in some places, and the amount of respect he shows Reed with his restraint, speaks vastly about his character.  Some of the tones that Quine unleashes-particularly on the title track-are things of wonder. Aside from Sterling Morrison, this remains Reed’s most vital guitarist, and his under usage of Quine remains one of Lou’s most unforgiveable offensive. But he’s all over this record, saving The Blue Mask from the trash heap.

Lyrically, Reed offers such musings as “I love women, I think they’re great” (“Women”), he lazily details the plight of alcoholism with such exclamations as “Oooh wee! Son of a B!”(“Underneath The Bottle”) and strangely offers to put his hat into the presidential ring while foggily remembering the assassination of President Kennedy (“The Day John Kennedy Died”), providing the historically inaccurate claim that our 35th president was shot in the face.

The real tragedy with The Blue Mask is how Lou’s primary muse-his (then) wife/manager, Sylvia-inspires some of the most pedestrian lyrics of his career. He waxes on how he’d like to offer a choir of castrati before making love to her and apologizes for jerking off to girlie mags. At one point, Reed even gives his own fag-era a hetero whitewash, with “Heavenly Arms.” As the last word on the record, Reed declares, “Only a woman can love a man,” which is surprising coming from a guy who spent a good amount of words on the subject when he was younger, and with a lot more tolerant eye.

For the chorus, he sings her name-full on-over and over.

Make no mistake, The Blue Mask isn’t worthy of the retrospective Mick Rock cover because it shares nothing in common with that era. This is “average guy” Lou, and it goes without saying that the more vanilla he becomes, the blander his work ends up.

The Blue Mask marks the end of a pretty abysmal late 70’s career slide, but pointing yourself in the right direction is not the same as actually accelerating out of the rut. There is evidence that the engine is still capable of speed, but you’d be surprised at the number of times you catch Reed just riding the breaks.