As I get older, the less I listen to Dead Kennedys. It's hard to admit, but the band has turned into such a relic for me-forever regulated to the era of Ronald Reagan. They were a vital element to my own musical development, for sure, but to suggest that the band carries the same weight now as they did 30 years ago, is ridiculous.

Their songs, and even their Winston Smith artwork, served a purpose back then. They educated us. When you heard "Holiday In Cambodia" for the first time, you thought Jello Biafra was singing "Cold! Hot! Cold! Hot!" until you read the lyrics and realized he was saying "Pol Pot." Then you went and researched who Pol Pot was, and you got the idea that these guys were more than just a punk rock band with a provocative name.

There was no internet then, so you had to dig for information. You also had to dig to verify Biafra's account of everything, and it wasn't until years later that you started to get the idea that his lefty barks were the product of a very hippie upbringing, something that he frequently white-washed during interviews.

With that being said, the Dead Kennedy's legacy was also tainted by the inability of this band who fought for years to get a corner of a national soapbox to get along with each other. There's nothing wrong with big ideals, but to chastise public officials for not listening or caring about others with apposing viewpoints becomes somewhat muted when it's learned that you can't even hash out your own internal band issues.

I won't get into the Jello vs. the rest of the band debate, but I will say that the entire event and the band's subsequent attempt to parlay their controversial re-issues with the kid from The Courtship of Eddie's Father into a money-grab "reunion" tour only deadens what little bark the band had left going into the new century.

And perhaps you can draw the same conclusions to that as you could with releasing the demo sessions for the In God We Trust e.p. into a 11" picture disc. Like the days of old, you discover that the source material really isn't the actual demo tapes, but from a video feed of those demo tapes because someone fucked up the actual audio tapes.


And what's the deal with an 11" piece of vinyl? With 7" 10" and 12" platters being the norm for over 50 years, how would an 11" record even play on my linear tracking turntable. Short answer: it wouldn't, so I'm personally saving my $30 (!!) for this questionable release, but hey, this may be right up your alley.

Besides, like the old song goes, "We've got a bigger problem now."


Finally, the legendary first version of the Dead Kennedys In God We Trust, Inc. sees the light of day! 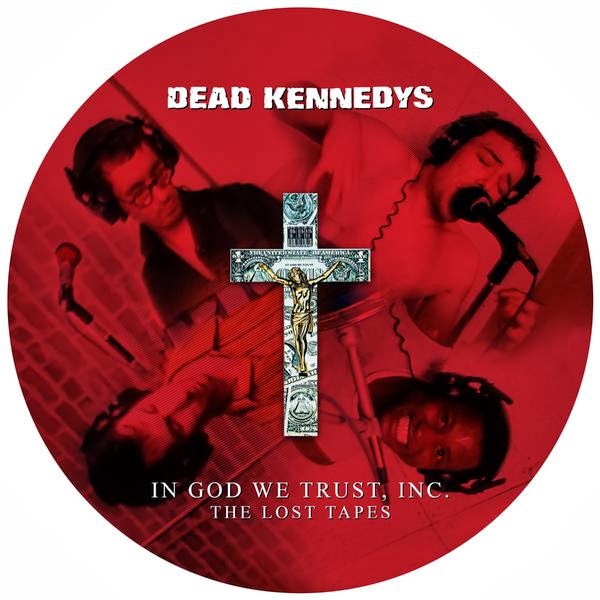 Recorded in 1981, the original tapes were defective, but a video feed of the session did survive. This is the first time these recordings have been committed to vinyl! The DKs at their most frantic and hardcore! 11" Picture disc includes DVD!

Hmmmm. I think I will pass on this one. It took me years to get all their 7" and 12" singles and the original cover copy of "Fresh Fruit..." Considering these are the audio from videos that I've seen, not even the 11" size and picture disc is going to make me buy this.