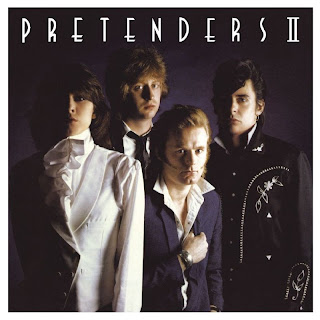 When it was originally released in 1981, The Pretenders’ II was almost universally panned by critics as reticent follow-up to their stunning debut. When bassist Pete Farndon and guitarist James Honeyman-Scott died after II‘s release, Chrissie Hynde regrouped with both grace and a creative spark that led to another acknowledged highpoint, Learning To Crawl.

Twenty-five years later, Rhino Records has re-issued the first two Pretenders efforts, with an additional disc for each that contain the obligatory bonus tracks. The debut really should need no introduction, but perhaps a re-introduction is needed for II, particularly since it would be the last album that featured the original line-up, back when The Pretenders were truly a band instead of a nomenclature for Chrissie Hynde. Of course, these past twenty-five years have featured a lot of disappointments from Ms. Hynde, which makes II stand as one of her better moments and one that ultimately didn’t deserve the critic’s knee-jerk vitriol.

When placed side by side, II does contain some prominent shortcomings over Pretenders: there’s some obvious filler (“Pack It Up,” “Jealous Dogs”), a few blatant attempts at re-writing the formula of the first, and yet another Kinks cover. While Pretenders jumps off the needle with energy and excitement, II sounds like a set from a band still reeling from the success of their initial offering while becoming comfortable with each other.

At the same time, II provides a big handful of songs that either match or exceed the expectations previously laid out. “Message Of Love” quotes Wilde before Chrissie re-writes it (“Life is unkind / We fall but we keep getting up / Over and over and over”) in terms that even an Akron high school dropout could relate to and “Talk Of The Town,” in a perfect world, should have been just as big of a chart hit as “Brass In Pocket.”

Thanks to some incessant touring to capitalize on the success of the debut, themes of the road pop up on a few standouts: “Birds Of Paradise” is a heartbreakingly beautiful song about a relationship being torn apart by distance, while “Day After Day” seems to suggest that, regardless of the difference in time zones, things will work out (“We’ll meet again / And pick up where we left off”).

The discovery in this expanded edition is with disc two, prominently featuring a live performance from the tour that features the band in top form.

The material from II is given a great kick in the ass thanks to Martin Chambers‘ kit work and James Honeyman-Scott’s subtle guitar flourishes. Both musicians are frequently overlooked by their contemporaries and the live disc demonstrates how criminal these oversights are and how fortunate Hynde was at discovering them and giving them an outlet for expression.

Seven months after the tour had ended, both Farndon and Honeyman-Scott died from overdoses which, by turn, ended the original intent that The Pretenders were “them” instead of “her.” Hynde had spent years trying to find this right balance only to have half of her musical equilibrium become another rock and roll footnote.

The upside is that the first two Pretenders albums established her own talents enough that she was allowed to continue, sometimes faltering a little beneath her original glory, but never embarrassing it. The tragedy is that the original quartet didn’t have additional recordings to examine, but the two that we do have are wonderful offerings. Chrissie puts it best in “Talk Of The Town” when she sings: “You arrived like the day / And passed like a cloud” but as the expanded edition of II demonstrates, there’s plenty of fair skies to enjoy in The Pretenders’ second album.