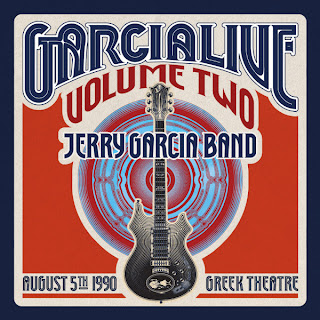 After an incredible run by the Grateful Dead in the spring of 1990, Jerry Garcia traveled on well into the summer with a series of shows with the renewed Jerry Garcia Band moniker.  His band provided him with an even more laid-back approach to the material selected-heavy on the Dylan covers and even a few tunes from the Dead’s catalog-with Garcia’s well-worn voice providing a nice cover for the unit’s easy-going interpretation.

And above it all is Jerry’s picking, which is simply in top form with this selection from an afternoon performance at Berkley’s Greek Theatre. This is the second part of a series of live sets from Garcia’s side project and the quality of this latest edition is high enough to understand why it was selected for release.

GarciaLive, Volume 2 repeats a half-dozen tracks from the eponymous double disc album from 1991, also recorded during this same tour. The first and second set close with the very same selections, as a  matter of fact, which would be a bigger issue if Jerry wasn’t in such fine shape for both shows.

The redundancies of those tracks are also overlooked thanks to an appearance of Bela Fleck on banjo for “Midnight Moonlight” and Jimmy Cliff’s “The Harder They Come.” These two tracks practically make GarciaLive, Volume 2 required listening for any Dead aficionado or anyone who enjoyed ‘91’s Jerry Garcia Band, but who might be afraid of double-dipping into their wallet for a similar performance.

Admittedly, there isn’t much of a difference in terms of style, but there’s ten more tracks presented that weren’t on that aforementioned title. Another feature of this release is how backing vocalists Gloria Jones and Jackie LaBranch both sound like they’re having a blast. Throughout the set you can hear them offering shouts of praise and joy mid-song, like Garcia is channeling some higher power in his fingertips while the rest of the band follow like worthy disciples.

GarciaLive, Volume 2 is a perfect Sunday afternoon-type of release, with its subtle deliverance and excellent reminder of how 1990 might have been Jerry’s last real hurrah. It presents him in a more accessible light while providing enough spontaneity to please any fan of Garcia’s historic tone and legacy within the jam community.
Written by Todd Totale