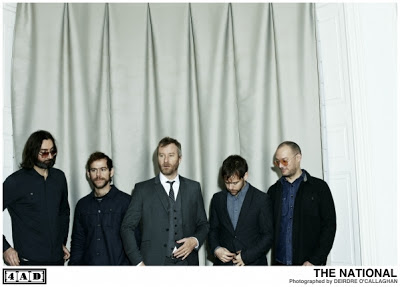 Some recent activity in the National camp as the band wraps a new record and plans a new tour.

Here's some garbage that clogged up my email that wasn't from Condoms Depot.

[Brooklyn, NY, February 25, 2013] -- Following the announcement of their return to New York on June 5th at Barclay’s Center, The National are pleased to announce their North American and European summer tour. The tour begins on May 16th and covers the eastern United States and Canada before heading to Europe.. Highlights include Bonnaroo Music and Arts Festival in Tennessee in June and Cincinnati's Bunbury music festival on July 14.

A brand new studio album from The National is slated for a May release on 4AD. This forthcoming release is follow up to the critically acclaimed High Violet (2010), which brought the band global critical and commercial success. People Magazine described the album as “stellar, moody atmospherics.” and Rolling Stone called it “a seductive collection of subtly surging anti-anthems, with evocative lyrics about the terrors and unexpected joys of adult life.”

Formed in 1999, The National consists of vocalist Matt Berninger and two pairs of brothers: Aaron (guitar, bass, piano) and Bryce Dessner (guitar), and Scott (bass, guitar) and Bryan Devendorf (drums). Their first full-lengths, The National and Sad Songs For Dirty Lovers, and a crucial mini-album, Cherry Tree, preceded their signing to Beggars Banquet in 2004. Alligator (2005), included underground anthem “Mr. November,” and raised their profile as the National grew into an incendiary live band. Boxer (2007), featuring songs like “Fake Empire”, “Mistaken For Strangers” and “Start A War,” sold over three times as many copies as its predecessor and saw them transformed from underground stars into a rock institution. In 2010 High Violet was released on 4AD and has sold 300,000 copies in the US.

Both individually and collectively The National’s members have been involved in countless artistic, charitable and socio-political pursuits.