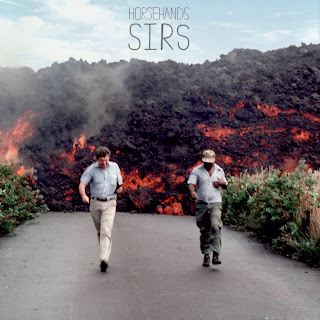 Just when I was wrapping up an extensive review of Ween’s catalog, along comes ’s Horsehands with their debut album, Sirs.

And commanding your attention from all of these impossibly complex guitar runs is a helium-aided vocalist who will have you reminding to everyone you end up playing Sirs to, “Focus on the music.”

Yet through the strings of Hosehands’ gnarly bits of quirky turns and gut punching stops ‘n starts, everything begins to fall into place. Sure, it’s a jazzy, Zappa-inspired corner of the room, but then again, I don’t know of tons of bands earning a living at playing this shit. There’s a passion behind their brand of nonsense-one that defies any logical sense from a commercial standpoint, opting instead to focus their wares on a select audience of jazz heads and guitar freaks.

Well count me in, brother, and I’m not suggesting that Sirs is worthy of your consideration simply out of pity. It’s a record that stands very much on its own and carves its own path, proudly and boldly through a landscape that’s designed to kill off bands like this.

I especially dig the entire homespun vibe throughout Sirs as it provides just enough evidence that there is very little slight of hand taking place with the studio toys.

By the album’s second half, the helium begins to run out and the arrangements begin heading down more psychedelic paths. Yes, it seems the hot shit front-end finally winded the power trio, but not until Horseheads unleash their own show-stopping version of “Tequila,” this time under the listing of “Kiwanis Ow” and a sprite instrumental called “Ocho” which about as choppy as a Wang Chung video.

Ultimately, half the fun of Sirs is considering where this band could end up, particularly when a lot of the time, Horsehands sound like they’re galloping out of control.

I would've enjoyed it more if the helium-voiced singer weren't so distracting. Music is really cool, tho.