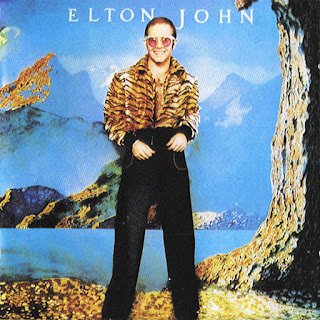 My first recollection of Caribou is from a drunken night with an Episcopal priest in my hometown. He was a young priest, mid-30s, while I was barely out of high school. He made classic drinks and his humidor was filled with exotic tobaccos and a pack of Camel no filters.

His record collection was not as impressive, as it contained an excessive amount of classical music and very little pop titles. The titles that a young man would recognize were leftovers from his days before seminary school, relics before he took a vow.

The alcohol made him a bit looser, to the point where he put down his glass of whiskey and bitters on the rocks and pulled out a record.

“You’ve got to hear this song by Elton John,” he advised, pulling out a copy of the superstar’s Caribou album.

The record also kicks off with another hit, “The Bitch Is Back,” a staple of Top 40 radio stations during the 70’s as they explored flexing their community standards with a song that sounded so naughty on the surface.

But the Priest wasn’t about to play me those simpleton hits from Caribou. Instead, he dug deep to the last track, “Ticking,” a character study of a man who snaps and kills a bunch of people hostage in some diner.

It’s pedestrian by Bernie Taupin standards, filled with all sorts of clichés and phony dynamics, making the song seem deeper than it actually is. Elton plays the song bare with plenty of tinkling ivories. Aside from a few vocal overdubs and an occasional synthesizer, the song clearly intends to end Caribou on a deep and reflective note, which is strange, as the rest of the album is the sound of Elton getting comfortable with his superstar status.

The Priest attempts to get comfortable with his former life, singing into his drink a showy reading of the lyrics-the alcohol only playing havoc with his timing at points, particularly during dramatic pause of the chorus, “ticking….ticking”

It was clear that the Priest thought the world of Caribou, as I’m sure it represented a moment in his life where the entire world was ahead of him. There are many records in my own collection where their appeal is more towards nostalgic fondness than actual worthiness.  To that point, I would certainly try to give an honest appraisal of a record’s ranking, and at the risk of the holy wrath that may come from admitting this, Elton John’s Caribou is the beginning of many disappointments from the artist.

Ironically, Caribou finds itself in between two of Elton’s greatest triumphs-Goodbye Yellow Brick Road and Captain Fantastic and the Brown Dirt Cowboy. Like its predecessor, Caribou was built entirely around time constraints and outside pressures. The biggest difference is that G.Y.B.R. revels in the diversity of its brief creative spurt while Caribou shows how bad things could get when you press for too much too soon.

Because, apart from the widely fluctuating appeal of the record’s two hits and the eerily contemporary curio of “Ticking,” Caribou offers little in terms of both redeeming value or artist development. In fact, it is the epitome of what can politely be considered a “rush job” when its entire package can more accurately be described as a “hose job.”

“Solar Prestige A Gammon” finds Elton trying to test the hypothesis that if he hangs out with ex-members of the Beatles long enough, some of their genius will rub off.  The track pointedly disproves this hypothesis while anally raping the English language in the process.

“Dixie Lily” finds Elton prepping a riverboat tune for a possible skit in The Muppet Show while “Stinker” is the most appropriately titled Elton John song in his entire catalog.

And if the good Lord strikes me dead, the only reason why Caribou gets a generous two-star rating comes at the inclusion of three awesome bonus tracks for the reissue version of this record. They are the seasonal favorite, “Step Into Christmas,” the fairly decent cover of The Who's "Pinball Wizard" from the otherwise shitty Tommy soundtrack and the b-side to “Don’t Let The Sun Go Down On Me,” “.” In fact, “” is so good that you’ll wonder why it was delegated to just a flip-side status, especially after hearing the flaccid selections chosen for inclusion on Caribou.

As easy as it is to explain why Caribou is such a setback, the record does very little at hinting how good Captain Fantastic would eventually become. Unfortunately, it would also set the standard for Elton’s ensuing mediocrity. The timing of Caribou would give the record a bit of nostalgic sheen-and somewhat of a religious blessing in terms of my old Priest’s support-but as God as my witness, it does little to warrant further examination or add to Elton’s prodigious 70’s output in any meaningful fashion.

Later on in the evening, he pulled his finger from his butthole and said,"You've got to smell this." It was as shitty as Caribou.