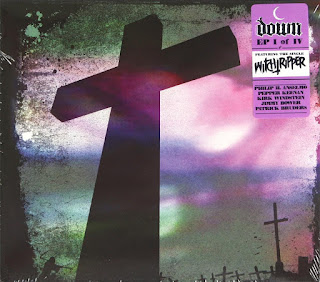 The idea is intriguing enough: an immediate extended play designed to highlight a different facet of the band’s personality.

Unfortunately, the band in this case is Down and the personality resides firmly on the massive ego that is frontman Phil Anselmo.

Down IV: Part One (The Purple e.p.) represents the heavier side of the band, a mammoth-pace sludgefeast that wears such worthy influences like Kyuss and Saint Vitus boldly on its sleeve.

But while the production deficiencies found within the catalog of both of those bands have proven to be critical to their legacy, it was also created from a budgetary need. Neither band had much money to work with, and what they did have was usually outdated and unreliable.

This isn’t the case with Down, and while there’s nothing to suggest that these New Orleans refugees can throw money around the studio, they certainly should have enough cash on hand to deliver a properly mixed release, especially on one designed to focus on their riffage.

The e.p. begins with the slow fade in of a skull-crushing riff. It keeps building, until a minute in some nifty guitar harmonics arrive. There’s still no vocals in the mix, no bass either, and outside of the dry snare crack and dead thud of the drummer’s bass drum, hardly any dynamics to the drums.

It certainly sounds raw, to an extent, but it isn’t until Anselmo blurts out “One, two, three, GO!” that you realize how fucked up the mix really is.

Anselmo’s always been a one-trick pony when it comes to vocal ability, but on Down IV: Part One, you’d think that he’s fucking Pavarotti considering how high in the mix they’ve put his vocals. After each lazy line, Phil works up some even lazier delivery, occasionally belching out the song title for the chorus, each burp even louder in the mix than the last.

Underneath his dominance is a layer of sludge that carries no real identity or, more importantly, bite. On “Open Coffins,” Anselmo encourages his guitarists Pepper Keenan and Kirk Windstein to “Tear that shit up young son,” with every follow-up bark of “Yeah” and “That’s what I’m talking about” his mouth overtakes the amplifier, defeating any notion that shit was indeed, tore up.

What’s left is a very egocentric project that plods along at a clumsy pace, hardly adhering to its original intent and doing little to suggest that we need a sequel.