You can practically smell the ego rising from the press release of Yngwie Malmsteen's Guitar Gods tour. I mean, why is it necessary to point out that Malmsteen got his own signature Fender model before Eric Clapton?

Because Yngwie has never been as universally revered as Clapton has and when you're as narcissistic as Malmsteen, you tend to point out every minute detail of your legacy, even the ones that really don't mean anything. Same thing goes for the Guitar Hero references. Who gives a shit?

Yngwie does. That's all that matters.

I won't be in the area during the time the Guitar Gods tour rolls around, otherwise, I'd be all over this. To see Yngwie and Uli Jon Roth (who may rank as one of my favorite guitarists ever) on the same stage would be pretty amazing, even if Yngwie's epic ego only allows him to log 9 dates to show off his six string prowess.

(New York, NY) - The king of neo-classical shred guitar, legendary guitar virtuoso Yngwie Malmsteen, will soon return to stages across North America this summer for the first-ever "Guitar Gods" festival tour. Bringing together such accomplished axemen as Uli Jon Roth (Scorpions, Electric Sun), Gary Hoey ("Hocus Pocus") and Bumblefoot (Guns N' Roses), Malmsteen will headline an epic celebration (6+ hours!) of the instrument for a full evening of guitar pyrotechnics. Each show will also feature special surprise guests. The "Guitar Gods" tour is created and produced by April Malmsteen, Yngwie's wife and manager and is presented in proud partnership with Guitar Center. Please see below for the itinerary; more dates to be announced. 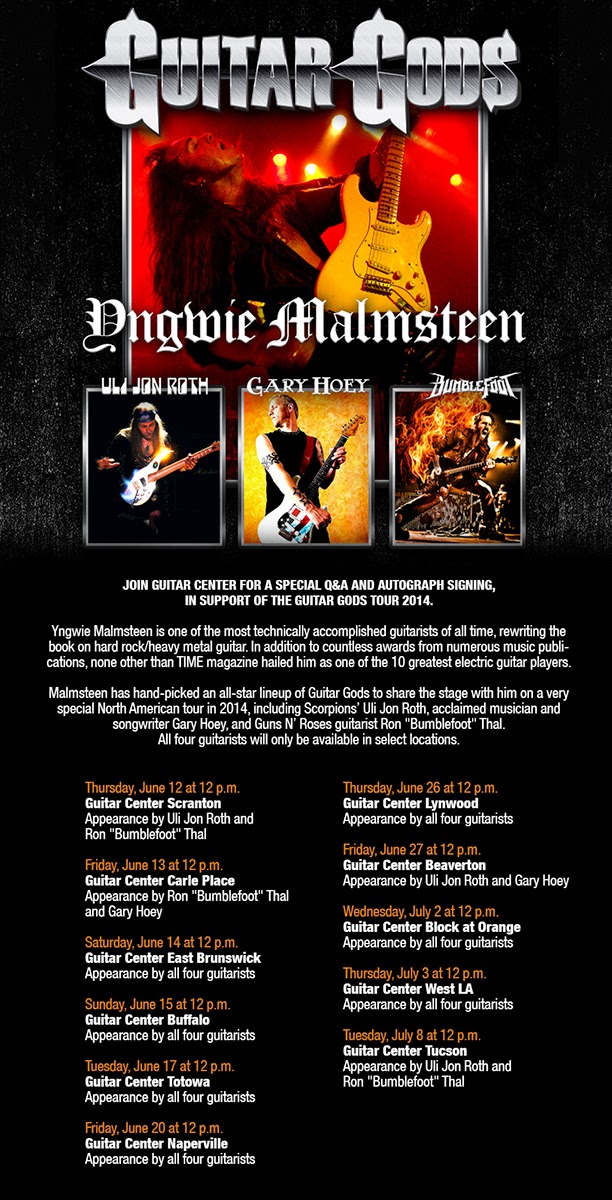 Of the upcoming tour, creator and producer April Malmsteen commented, "Being able to put together this festival has been a lifelong dream of mine. I sincerely believe that "Guitar Gods" will bring tremendous value and enjoyment to not only the guitar and heavy metal enthusiast, but also to anyone who loves music." Yngwie Malmsteen's most recent studio album, SPELLBOUND and his first book, the autobiography, Relentless: A Memoir, are both available now. Malmsteen was recently profiled about both on NPR's Weekend Edition Saturday; that segment can be heard here. In other news, the Yngwie Malmsteen premium artist signature series by Fender is now available. The series features a full lineup of Malmsteen-endorsed accessories such as guitar strings, instrument cables, gig bags, electronic tuners and more.

For nearly three decades, Grammy-nominated guitar icon Yngwie Malmsteen has been amazing audiences with dazzling technical speed and ability. Malmsteen's signature style of playing, which combines elements of seemingly disparate styles of music - metal and classical, spawned the now commonplace genres of heavy metal known as "shred guitar" and "neo classical" and earned Malmsteen the title "the Paganini of heavy metal". Malmsteen was the first guitarist to have his own Fender signature guitar model (even before Eric Clapton). He has graced the cover of more than 200 magazines worldwide, has won every guitar award imaginable and to date, has sold millions of records. Time named Malmsteen one of the "Top Ten Greatest Electric Guitar Players", an honor he shared with the likes of Les Paul, Jimmy Page and Jimi Hendrix. "Guitar Hero" enthusiasts know they have arrived when they are bestowed with the Yngwie Malmsteen award in the Xbox 360 version of "Guitar Hero 2". The award signifies a 1000+ note streak in succession.

Held in the highest regard in his own right, Uli Jon Roth brings the very special 40th Anniversary Scorpions set that he has been playing to audiences from Europe to North America, embracing his history with the band and digging deep into their catalogue for this tour.

Acclaimed for his accomplishments for perfecting his playing in multiple genres (rock, blues, surf), Gary Hoey performs his radio hits such as the Billboard Top 5 smash "Hocus Pocus" along with other favorites.