Lee Ranaldo and the Dust - Last Night On Earth 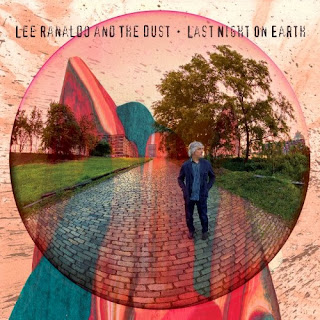 As heartbreaking as Kim Gordon and Thurston Moore’s divorce was/is, the real shame is with the uncertainty of where all of the domestic drama leaves Sonic Youth. You can only assume that the band’s infinite hiatus is permanent, save for the occasional reunion offer-which has got to be harder than just a couple of dudes quibbling over royalties or how drunk C.C. was during an awards show performance.

Not only that, but two of Sonic Youth’s members are far too good to simply let their talents squander because Thurston can’t keep his cock in his pants. So while the rest of the world were morning the dissolution of indie rock’s king and queen, I was more upset at the notion that S.Y.’s guitarist Lee Ranaldo and the band’s criminally overlooked drummer Steve Shelley were without work for the first time in decades.

Thankfully, Ranaldo had already proven his role as a fully capable singer and songwriter for the band, so it wasn’t too much of a stretch to patiently wait for his next move. The better news is that his new career as a solo artist also incorporates Shelly on drums, making the grand opening moniker of “Lee Ranaldo and the Dust” essentially one-half of the band that is now part of the divorce decree of Kim and Thurston.

The easy verdict is how the debut Last Night On Earth will appeal to nearly everyone who appreciated Lee’s songs on Sonic Youth records, with the possible exception being those who won’t be receptive to Ranaldo’s more mainstream tendencies and penchant for noodling.

Because Last Night On Earth is an effort with a clear attempt at being less an art rock record than one designed to simply rock, with a natural focus on Lee’s guitar work. There are just as many acoustic flourishes as there are feedback squalls. There are straight-forward verse-chorus-verse structures throughout out and plenty of intriguing solos who want to examine his guitar prowess and studies of tone.

There are moments where you’d swear Ranaldo was a member of Built To Spill rather than the dissonant explorations of Sonic Youth, but as a fan of each, I can find very little to fault in that assessment. Each listen of Last Night On Earth is as rewarding as the last one, which makes Ranaldo’s first effort out of the gate-thirty years after the fact, no less-a positive development in an otherwise dismal dissolution.

“Everyone falls apart in the end” he sings on “Ambulancer,” but Last Night On Earth shows how Ranaldo has picked up and moved on to better days.
Written by Todd Totale

Good stuff. Enjoyed the previous one, too. The funny thing is I NEVER liked his songs with SY. Oh, well...

Actually, If I like a SY song, odds are Mr. Moore is the lead vocalist. Sorry.

But, having met the band, I can say Lee Ranaldo is the coolest, nicest one.