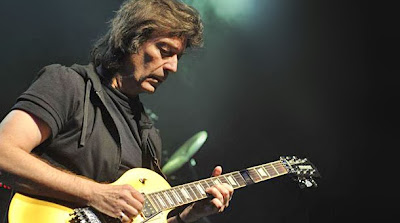 More news from the Steve Hackett front as he announced that a new document of his Genesis Revisited tour will be released on October 29th.

On May 10th, the sold-out London's Hammersmith Apollo show was filmed in front of an ecstatic audience to result in the new live CD/DVD package GENESIS REVISITED - LIVE AT HAMMERSMITH. The 3 CD + 2 DVD (with 5.1) box set will be released on October 29th in North America via InsideOut Music and features special guests including Nik Kershaw, John Wetton, Jakko Jakszyk, Amanda Lehmann and Steve Rothery.

Please see below for the complete track listing.

Of the new release, Hackett commented, "The 5.1 DVDs with stereo CDs is a feast for all the senses. I was blown away by the fantastic response to those May UK gigs. The autumn Genesis Revisited shows will include different Genesis material as well as all the big faves that bring the house down...See you all soon!"

In other Steve Hackett news, an exclusive VIP experience meet & greet package for the North American tour dates is now available. The package includes a pre-show meeting with Steve, a photo with him and a signed poster plus an exclusive VIP laminate and T-shirt printed especially for the VIP experience. This package is only available to existing ticket holders; click here for details.

For more than three decades, Steve Hackett has been known for his innovative tone and extraordinary versatility as a guitarist and composer. He helped define Genesis' sound as lead guitarist in the classic line-up and went on to have a highly-successful career as a solo artist, and also as part of 80s supergroup GTR with Steve Howe.

CD2
1. Unquiet Slumbers for the Sleepers
2. In That Quiet Earth
3. Afterglow
4. I Know What I Like
5. Dance on a Volcano
6. Entangled
7. Eleventh Earl of Mar
8. Supper's Ready