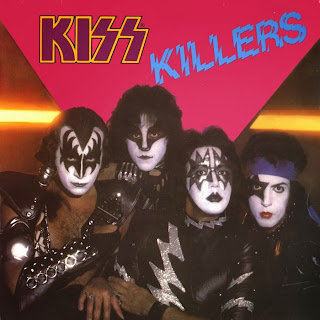 The only reason Killers gets a mention is because of four new tracks written especially for the compilation. Otherwise, the record is nothing more than a contractual best-of offering, a collection of some of the band’s better known tracks up until that point, but hardly a comprehensive gathering like Double Platinum intended to be.

The band had just experienced an unmitigated failure with the experimental The Elder, a divisive (and awful) record that not only pissed of fans, but also the band’s foreign record companies.

Here’s what I don’t understand: did Gene and Paul’s marketing prowess start later in their career? Because the entire genesis of the Killers project seems like it was based on poor negotiating and contractual obligation.

With sales of The Elder pushing the band closer to the where-are-they-now category, the band’s foreign representatives cobbled together a quick greatest hits project and demanded the band contribute four new songs to the release. How a band leaves themselves this vulnerable is beyond me, but Gene and Paul can never be called anything but compliant in their business dealings; the two members obediently directed their new drummer back into the studio and secured the rights from Ace Frehley to use his picture for the cover, on a ruse that continued to pretend to fans that he was still an actual member.

Kiss then scrambled for help with outside creative forces to come up with the new material, eventually working with none other than Bryan Adams for one track (“Down On Your Knees”) and Kiss nut-swinger Adam Mitchell on a couple (“I Am A Legend Tonight” and “Partners In Crime”). The fourth song is the Stanley penned “Nowhere To Run” and none of these new cuts represent anything worthwhile to the average Kiss fan or any passive fan.

For completists, they represent some kind of baloney bridge between the misguided bridge between The Elder’s “art” leanings and Creatures Of Habit’s required rock resurgence. The reality is that the new tracks on Killers were quickly created and their mediocrity approved as a “meets requirements” rating for those of you in the professional world or a solid “C-“ if you’re more familiar with educational grades.

Sonically, the tracks stick out like a sore thumb from the rest of the cuts, wallowing in a production quality that is more like a demo recording than a final mix.

Speaking of, Killers is somewhat of note for including the single mix of “Shout It Out Loud,” “Detroit Rock City” and “I Was Made For Lovin’ You.” It also contains the live edit of “Rock And Roll All Night,” which was the version that most familiar heard when the band began their unbelievable ascent, while its typically the studio version that gets the nod for most Kiss compilations.

Killers ended up being a moderate success in overseas countries while arriving in America as a pricey import with a ridiculous cover art, including the misleading notion that Ace was even a part of the newly recorded tracks. For this deception and for the band’s compromising attitude towards the new songs within this release-particularly considering how homogeneous the new tracks actually turn out-Killers is another in a long line of questionable products authorized by the band.
Written by Todd Totale

My lp is unique in that its a German pressing that I bought for a couple bucks used from a girl in high school. Anyway, in Germany the SS looked too much like the old Nazi SS insignia so on my lp, the 'ss' in Kiss uses regular font. It actually literally makes the album sound worse than you described.

You'll have to endure a Ghost review first, tactfully scheduled for Halloween.