Iggy and the Stooges - Ready To Die 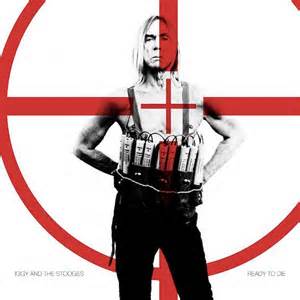 It’s not as bad as The Wierdness, but that’s not saying anything.

In fact, Iggy Pop isn’t saying anything relevant in the 21st Century, and we could admittedly go back into the last few decades of the last century and probably say the same thing.

Which explains why the rock universe collectively yawned when it was announced that Pop was revamping the ole’ “Iggy and the Stooges” marquee for a reunion album. If Pop and the boys couldn’t get the hint that the crowd only wants to hear Raw Power cuts, they could have at least read the reviews at how sacrilegious the last record was and steered away from an album of all new material.

At the same time, even Iggy’s most recent solo records were utter dog shit with Beat ‘Em Up, Skull Ring, or any of those ridiculous Francophile records reminding us to use a plastic bag when handling anything related to James Osterberg.

The fact that Iggy was able to drag guitarist James Williamson away from a lucrative job as an executive is admirable and is the only thing that saves this record from the same amount of vitriol that I had for The Weirdness.

In fact, Williamson delivers some exceptional performances, but not enough to come close to the last time he and Pop worked together, 1977’s Kill City. His return sounds like a legitimate second wind, while Iggy sounds like he’s gearing up for retirement.

“Businessmen with dirty tricks/Followers of 666” is the best Jimmy can come up with, which is funny, considering the entire retirement package that he’s been milking for quite some time. There’s no way that Iggy could command the kind of guarantee that he’s been getting away with by using “The Stooges” somewhere in the concert flier if he were to stay solo.

Somehow, I don’t think that Williamson is as big of a pushover as the Asheton brothers were, which may explain why the guitarist’s dna is all over this record, saving it from complete ridicule.
After a few spins, I began humming some of Ready To Die’s more embarrassing tracks and actually enjoying some of the good ones, like “Burn,” “Dirty Deal,” and the title track.

Which makes Ready To Die the equivalent of a Carnival cruise experience, in a sense. It’s  pre-packaged trip that makes for a few good snapshots but little in terms of adding to the moniker’s detailed punk rock previous works of art.

The troubling thing is how Williamson’s stunning guitar resurgence does little to wake Pop from an effort that could have been something more than a face-saving tour souvenir.

Instead, Pop practically explains everything wrong with Ready To Die on the song “Job,” where he finally admits: “I got a job and I’m sick of it.”
Written by Todd Totale