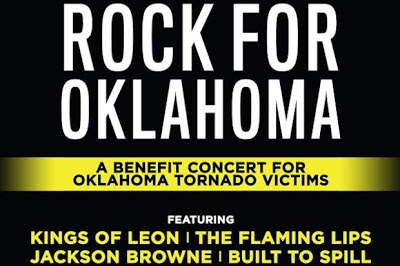 Some cool news out of the Flaming Lips camp:

Oklahoma City favorite sons The Flaming Lips will join an all-star line-up of musicians with a special connection to the state of Oklahoma for the Rock For Oklahoma Benefit concert, which will raise money for victims of both F5 tornados that struck Moore, Oklahoma City, and surrounding areas this spring. The Flaming Lips, Kings of Leon, Jackson Browne, Built to Spill and special guests will perform at the Chesapeake Energy Arena on Tuesday, July 23, 2013. Tickets are $35 and $50 and are on sale now online via Ticketmaster.com or by phone at 1.800.745.3000.

Losses from these storms are estimated to reach upwards of $2 billion. Many of the short-term needs of the people affected by the tornados have already been met; the goal of Rock for Oklahoma is to help them with long-term issues and problems, such as regaining livelihoods. All of the proceeds will be dispersed to central Oklahoma community organizations and charities, via local charities.

"Shakespeare said, 'It is not enough to help the needy up, but to support them after,'" says Lips frontman Wayne Coyne. "In our small way we are trying to not just be here at the moment of immediate need, but to stay and help with the rebuilding. After all, this is our home and they are us and we are them."

At present, The Lips have recently returned home after dates around the globe in support of The Terror including shows w/ The Black Keys. They have a couple more dates w/ The Keys as well as a pair of shows w/ support from Spiritualized.

The Flaming Lips upcoming tour dates are as follows: