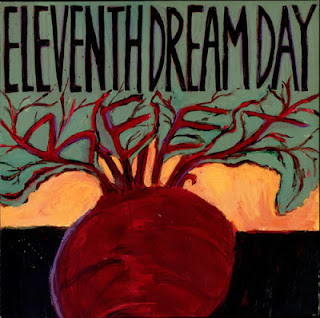 By the time I had gotten around to learning about Eleventh Dream Day, they had already released a long-player on the same independent label that legendary Iowa band The Hollowmen had been a part of. I believe EDD stuff could be found in Amoeba Records mail order sheet that they tucked in the sleeve of The Hollowmen’s Pink Quartz Sunblasting release, but it wasn’t until I’d heard that Eleventh Dream Day had actually been signed to Atlantic records before I bothered to take a listen.

It was still somewhat rare for an underground rock band to be signed to a major label back then. The notoriety of the event got me wondering what I might be missed.

The closest reference point was an e.p. released by Amoeba featuring an atypical Neil Young cover that everyone seemed to note was Eleventh Dream Day’s primary influence.

But the e.p. also had a brutish rocker called “Go,” which sounded like strong potential, but certainly not of the commercial kind that Atlantic Records would surely be interested in.

From this brief introduction, a copy of their third full-length, Beet, came into the college radio station where I worked as the Program Director. The additional promotional copy of the record that came from Atlantic Records was promptly secured for my personal use, and it still bares the “Say It When You Play It!” sticker on the cover, encouraging radio station personal to mention the band name and record after each airplay.

Beet begins with the slow burning opener “Between Here and There” with nothing more than Janet Bean providing a tentative tom-tom gallop while guitarist Baird Figi butts heads with Rick Rizzo, Eleventh Dream Day’s other guitarist and lead vocalist. My Music Director recognized the song’s awesomeness and immediately added the track to our station’s playlist.

“You look past your prime,” Rizzo observes, adding that the years “Must weigh heavy daily on your mind.” It’s the result of a few years of being cooped up in an Econoline van, playing Midwestern dives to small crowds and even smaller paychecks.

By the chorus, the song unleashes, pairing Rizzo and Figi off each other and providing the second wind to get on the road again, “like the MC5 way,” suggesting that the band wouldn’t stop until the song is over.
“Testify,” Beet’s first single, is a concise moment of everything great about Eleventh Dream Day. It’s here that you begin to notice a pattern to Rizzo and Figi’s twin guitar attach. They don’t play with each other, per say, but more against each other. The guitar solo of “Testify” is a great example of this. It’s blistering, chaotic, a less sophisticated version of Tom Verlaine and Richard Lloyd if they cared less about the precision of their playing and more about the power of it.

Rizzo and Figi maintain that power throughout the entirety of Beet, including another go at the awesome “Go (Slight Return)" but no clues as to what exactly was the strange occurance from April 1, 1988.

Nearly every song on Beet finds drummer Janet Bean trying to keep time with the controlled chaos of the guitar but the hoot is the very Exene-esque vocals she adds to Rizzo’s own blue-collar delivery, lending obvious nods to X without the melting pot.

This is a very Midwestern record, and without the guitar heroics that decorate it, Beet could easily blend into the woodwork of forgotten local favorites.

Instead, Beet became a forgotten regional favorite, with appreciative fans peppered across the world thanks to Atlantic Record’s enormous reach.

Too bad the company couldn’t deliver an enormous promotional reach for Beet, but realistically, would the band ever be the kind of draw that pulled from beyond the underground?

Stranger things have happened, and one of them-a band from -would singlehandedly change the entire landscape of rock music, enabling bands like Eleventh Dream Day to have a legitimate chance at having a few good years of financial stability.

That sea change was still a couple of years away, and not only was Beet’s marketing might nothing more than a quick fart of Atlantic Record’s promotional department, the cover itself was low-budget and understated.

As it stands, Beet became one of those magical bargain-bin finds for many and a document of “I told you so!” snarkiness for any early believers trying to convince you to take notice. Beet’s strength is in its own desire to convince you of exactly the same thing-and to grab your attention through hard, honest performances. They’re bundled with unique and grounded stories, each one of them compelling and delivered with honest intent.

But the real reason for Beet’s enduring legacy is the aforementioned guitar hijinks, which are worthy of slack-jawed awe and probably the biggest shame of the record’s poor name recognition.

Nearly a quarter-century later, Beet remains in print, a testament to its supporters, for sure, but more importantly it gives fans of blue collar rock music with some very expressive guitar explorations another opportunity to discover an overlooked gem.