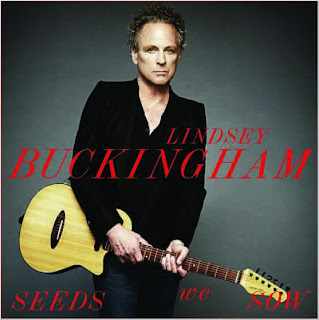 If it’s been awhile since you’ve been reminded of Lindsey Buckingham, I understand completely. He’s someone that we tend to take for granted, and then something comes around to remind you. It may be that lost classic “Trouble,” from Law & Order that you hear out of nowhere, only to remember how awesome it is. Maybe it’s a spin of Fleetwood Mac’s Tusk where you discover how much the man emulated Brian Wilson, to the point where you understand the risks that were involved with that album, particularly after the success of Rumors.

Or maybe it’s that moment when you first heard Lindsey’s version of the awful Fleetwood Mac song, “Big Love,” when you discovered that underneath all of that embarrassing 80’s crud was a song of incredible beauty, provoked only by an acoustic guitar and Buckingham’s lightening fast finger picking style.

It had been years since I was reminded of this, probably as long as that version of “Big Love” became famous, prompting guitarists to drool and your parents to say, “I told you so.”

A few years ago, some friends checked out Lindsey in at a snug little ballroom. His prowess was repeated, and I was envious of it. So when I received word that he was coming through the area again, I promised myself that I would not ignore it and I even promised my wife a ticket, to which she asked, “Who is Lindsey Buckingham?”

Don’t beat her up too much; a woman my age asked the same thing when I told her and I could have easily avoided both moments by saying “The guitarist from Fleetwood Mac.”

Fleetwood Mac doesn’t mean that much to me anymore. I still get a kick out of Tusk and Rumors was on my parent’s stereo for two solid years before it ever came off, so I’m quite aware of its greatness. I remember buying a copy for myself in college, only to give it to a girlfriend because I discovered that I was still sick of it. It wasn’t until the deluxe reissue came out with all of its nifty demos and studio outtakes that I warmed up to it, thereby reminding myself, “Gee, I wonder what Lindsey’s been up to.”

On a whim, I found his latest Seeds We Sow-my first Buckingham album since Out Of The Cradle-stomaching the cover art that screamed, “He’s in a mellow mood.”

But cover art is for record loyalists and old luddites, the shit that was being beamed to me in ones and zeros proved to be some revelatory stuff. The first spin found Buckingham alternating between impressive wordplay and straight up weird pop music, some of it very familiar to 1981’s Law & Order with ultimately no chance at commercial accessibility.

Not that it matters much to Lindsey, and that’s the beauty of it. Seeds We Sow fluctuates from folk social commentary (“Seeds We Sow”) to spastic new wave political pop (“One Take”) to a telling, frenetic piece of dreamy fingerpicking (“Stars Are Crazy”). Whatever the direction, it’s unmistakably Lindsey and it’s an unfortunate oversight to anyone who may have missed this left-field pop gem, penned by a man now in his early sixties but who continues to create with youthful exuberance.

It’s only during the dramatically beautiful penultimate track “End Of Time” where the topic of mortality finally comes up. It’s a plaintive plea for reprieve-of which, he’ll never get, of course-but it’s a gripping moment where Buckingham tempers his unfettered nature and delivers the most mature moment on the record.

Ignore the adult contemporary cover; within the grooves of Seeds We Sow is a lush display of someone continues to approach music like a kid in a candy store. Within that ageless performance is a man who has reached the heights of popularity and come away from it with the kind of integrity that you’d hope all of those classic rock heroes would someday find.