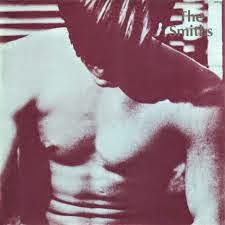 Here's the album in which I first discovered The Smiths, but not in the way in which you think.

It was from a review in Rolling Stone magazine-back when things like print music magazines mattered, and when reviews could expose a band to a wider audience. As much as I hate to admit it, Rolling Stone magazine prompted me to explore new music unseen, and the results were rather mixed, even though the intentions were good.

I didn't buy The Smiths debut from that review.


And none of the words had any impact on that decision.

In fact, I can't even remember if the review was positive or negative, but I'd venture a guess that the folks at Rolling Stone have re-written their own history enough times to call the Mancunians' debut a "landmark" and to heap plenty of 20/20 praise on its arrival, even if their first glance was indifferent.

What struck me was the artwork-this was during a period when Rolling Stone's reviews all featured the record artwork-and  how it was different that any other album cover at the time. It was clear that this band paid careful consideration to their image, or at least the sleeve in which it came in. It looked edgy, mysterious and somewhat iconic. Even the font looked clean.

It also looked gay. And to a young man growing up in the Midwest, "looking" gay was something that young boys were instructed-either directly  or indirectly-not to  appear. These were the instructions of the same dude who also advised against wearing pink or getting only your left ear pierced, because an earring in the right ear meant you were gay.

Both ears? You were bi.

All of this hopefully sounds ridiculous to anyone now, but ask any Midwestern man over 40 and I'm positive that you will hear similar nonsense.

I would like to think that The Smiths are somehow responsible for the cultural shift that made it possible for young men to not have to worry about such things, because to not purchase a record simply because the cover might suggest that you were somehow a homosexual is entirely the wrong reason for not buying it.

At the same time, had I actually been brave enough to purchase The Smiths, there is a distinct possibility that I would not have re-examined the band until much later than I actually did. That's because The Smiths' debut is not the infectious and Earth shattering record I needed to hear in order to begin to not give a shit what other people thought about the fucking cover.

But having the luxury to look back upon the band's debut after the fact provides its glaring deficiency: the horribly dated mix. The band could be a tightly wound monster, but The Smiths sounds like it was merely pieced together by a few dedicated musicians, a meticulously-inclined producer and an unlimited amount of studio time to make it all stick.

The drums sound thin and Morrissey hasn't quite found his fey swagger, coming across as the bummed out bastard who just happened to land the gig of vocalist because he was the only dude that brought lyrics to rehearsal. Guitarist Johnny Marr and bassist Andy Rourke give spirited performances, but when a pair of tunes feature Paul Carrack, you tend to wonder what other musicians the producer might have been able to call up after a full evening of studio tracking.

The sequencing is a complete downer too, even by Smiths standards. Nearly every song could be the soundtrack to a child abuse nightmare, and even though the band is somewhat famous for being morose, it can be a fairly grim process getting though The Smiths without wanting some sunlight or a mindless cartoon after a complete listen.

The American issue squeezed in the delightful "This Charming Man" single at the end of side one to brighten things up, but its placement on the debut is made redundant with the much-better Hatful Of Hollow compilation, and is apparently becoming phased out of future issues of The Smiths.

True fans are going to (like me) get here eventually and I must acknowledge that some of the themes and arrangements within The Smiths will probably be close to the hearts of the fans that began here. There is no doubting this record's ultimate influence, but for me the debut sounds like a band developing not only its footing, but also their own authority. They surely must have known that they sounded much better than what producer John Porter presented on this record, as every record the band self-produced afterwards reflects some superior musicianship and real prowess compare to the tracks found here.

What works best is the lyrics, a point that Morrissey no doubt realizes and can use as an example whenever he attempts to diminish the roles of his other bandmates. The irony of The Smiths failure is how it doesn't represent the entire band's strengths, and probably would have rendered them an eccentric cult curio if they hadn't pressed on to do much greater things in an unbelieveably short amount of time.

It's not the record that you should start with, but by discovering the band through other albums, you'll soon end up here anyway.
Written by Todd Totale