You Wanted The Best, You Got The Shaft! KISS Vs. The Rock & Roll Hall Of Fame

Sorry. I took some time off to boycott winter.


Now that it’s Spring, let’s pick up with a Glam-Racket tradition: making fun of the band KISS.

You really didn’t think that I would be able to ignore the almost daily statements coming out of Paul Stanley and Gene Simmons concerning their Rock & Roll Hall of Fame induction, did you?

To be honest, I almost did, as the two co-founders reluctance to perform with the other two co-founding members was nothing that would really surprise the most fair weather of KISS fans, so why comment on it.

But what’s different here is the constant barrage of whining complaints about the Rock Hall process, which has been a continual complaint by anyone who noticed how the RRHF overlooks certain genres and is managed by a few rich white boys with a limited view of rock music. Just because Gene and Paul have suddenly brought the hypocrisy into the spotlight once again doesn't mean that we have to listen, particularly since their own actions are riddled with hypocrisy too.  We have been talking about the lack of legitimacy and transparency in the RRHF for quite some time now and we will continue bitching about it long after these two wealthy men have hung up their platform shoes and worked out a retirement plan with whoever wants to assume the moniker for future KISS Army mouthbreathers.

Let’s begin there, where Paul Stanley suggested that KISS will continue long after he and Gene call it a day. His first ridiculous mistake is to suggest that the band KISS and the KISS corporation are two separate things. If he wants to hint that someone will be granted the authority to dress up like the band's characters and continue peddling KISS shows to whoever wants to don the makeup, then he should be able to understand that there are a lot of people who resent this idea, particularly those who are drawn to the original members that got this band rolling.

Gene and Paul can remind us all they want that it was their idea and their hard work that made it all possible, but to pretend that Ace and Peter are not entitled to a certain amount of higher praise than later "members" is extremely shortsighted. If he is really sincere about letting other people use the original member's make up scheme and appearance, then all of his phony baloney complaints about how other KISS members are deserving of a RRHF induction is suddenly irrelevant. He has every legal right to allow other people to continue on with his band’s image, but he doesn’t have the power to dictate to the rest of us how this line-up will be received, or how many more fans feel that it was the original members that made the band what they were.

Obviously, to anyone with an ounce of logic in their head recognizes that replacement members will only further taint the band’s reputation and secure the very real fact that the band’s brief output featuring Gene, Paul, Ace and Peter is the only part of KISS that's worth examining. And as someone who straight-up hates this band, I’m smart enough to recognize that this original line-up was hugely influential and deserves to be in the Rock and Roll Hall of Fame. 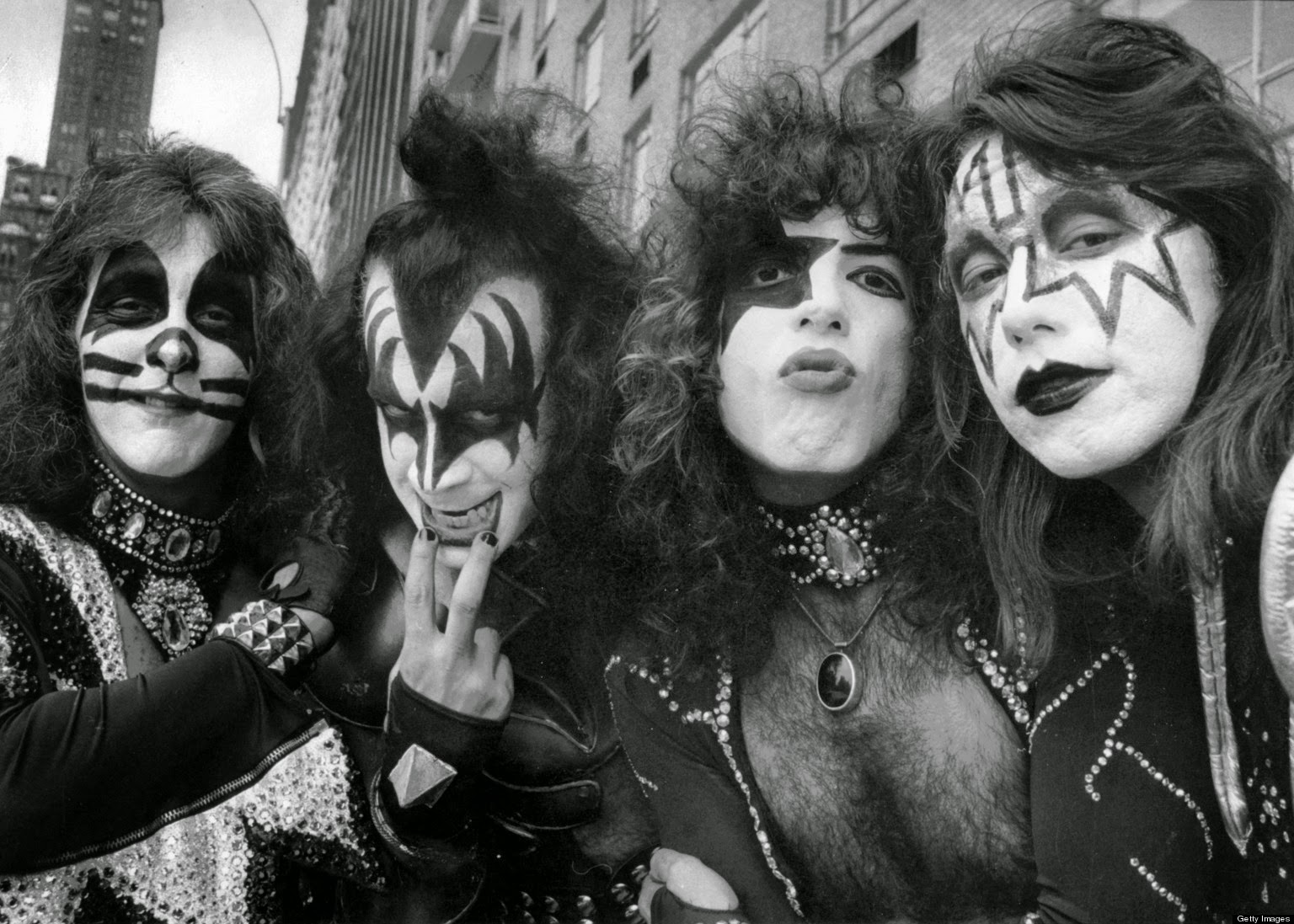 What’s so disingenuous about Paul’s constant complaining is how he's suddenly incensed and has now assumed the role of the heavy. That has traditionally been Gene’s m.o.  He has a history of slighting Ace and Peter and questioning their contributions. To now point out how these two members were often m.i.a. for much of the line-up’s later records is silly, particularly since Paul and Gene signed off on trying to pull the wool over their fans by suggesting that Ace and Peter were still active members when the liner notes told otherwise. To only now fess up to their diminishing contributions and continually suggest that their roles weren’t essential to building the “product” is childish. There is nobody in their right mind that will suggest that Lick It Up, Revenge or Sonic Boom is as influential as Destroyer or Rock and Roll Over or that posters of Tommy Thayer and Vinnie Vincent line the bedroom walls of rock and roll fans around the world.

Besides, both Gene and Paul have cock-blocked Vincent’s contributions and for years have suggested that his role in rebuilding KISS during the mid-80’s unmasked period was not pivotal. The very reason that he left the camp was because Gene and Paul never allowing him to be a true member even when his material was essential in providing the band with their first gold record since Unmasked, even without makeup. Even Eric Carr, the drummer they love to refer to and eulogize was never a full fledged member of KISS’ and never received full corporate authority with any of their licensing opportunities. They were paid to play, and anything with a logo at the merch table helped fund only two parties: Gene and Paul. So why on earth are they now whining about not allowing anyone besides the original line-up into the RRHF when they didn’t even offer these people full membership to begin with?

For many years, Paul seemed to be the most rational of the two, particularly in regards to white-washing Ace and Peter’s struggle with addictions and in acknowledging their contributions. Gene was usually the one who brought up the stories of their abuse and lack of creative input, which is ironic considering how Gene himself checked out during most of the 80’s, leaving Paul alone to entertain his commercial drive, usually with outside help.

Now, it seems that the roles have reversed: Gene seems almost amiable when discussing the possibility of Ace and Peter joining him and Paul onstage for a song or two.  Paul, on the other hand, goes ballistic at being told by the Hall of who is being honored and who isn't. Stanley seems bent out of shape that he wasn't consulted in all of this, and how the Hall wasn't interested in having the current configuration of the band perform during the ceremonies. Of course, Paul has a new autobiography that’s out, so it appears that all of his fucking commentary is just another way to build interest for his pocketbook, never mind the fact that his band is now comprised of two poseurs who are merely hired hands.

Stanley likes to use the Grateful Dead as an example of how unfair the RRHF has been to KISS and their desire to put on the makeup with their two staff members and play during the induction ceremony. But nobody gives a shit about the current configuration of KISS, so why not just admit that you’ve run your logo into the ground, be a man and take the honor without performing, an honor-by the way-that you fucking owe to the poor saps that lobbied hard on your behalf? 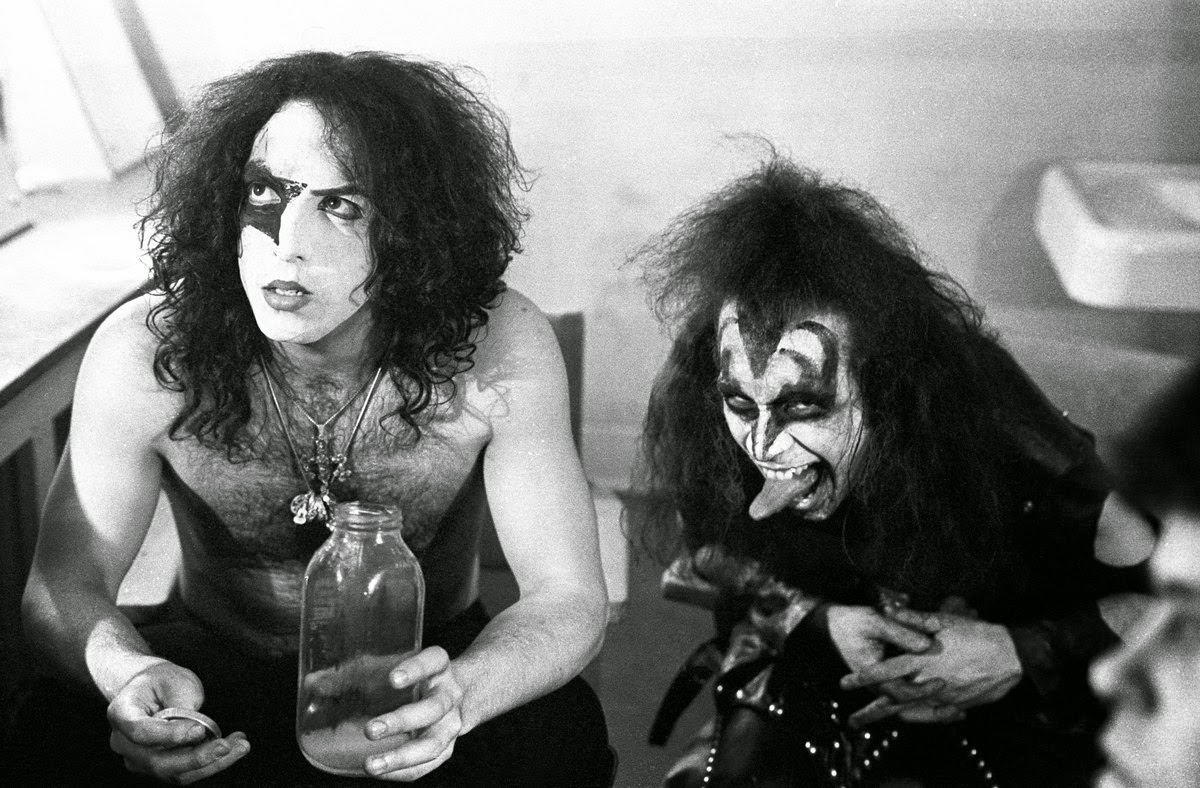 All of Gene and Paul’s talk about how their fans are the most important thing has been sullied by this entire fiasco. You could tell that the two were hurt after being overlooked for so many years, but as soon as they get in-under the condition that only the original membership gains entrance-they pout and take their toys and go home. I believe that I even read where one of them dared to suggest that the RRHF would be making money from KISS’ legacy, so why would they allow the Hall’s leadership to dictate how their band was going to be presented?

How about the fact that all of the band’s archives are only taking up space in a warehouse at the moment, draining Gene and Paul’s pocketbooks in rental fees when they could be placed in a venue designed to display them, in turn building up interest in the band and opening wallets in return. But neither KISS member likes the idea of someone else mucking up the supply chain of KISS dipping directly in their fan’s pocketbooks.

Walk up to Simmons in an unauthorized KISS t-shirt and ask him to autograph something. Changes are he’ll refuse based upon the origins of your attire and then browbeat you how you’re not a real fan by wearing a knockoff.

They also aren't very good at planning a business model beyond what's happening with their next, immediate product. After that, well it's just Paul Stanley talking a bunch of horseshit (does he really think fans are going to pay top dollar for an officially licensed cover band?) and Gene Simmons reminding us all how he's smarter, wealthier, and more promiscuous than the rest of us.

The band's immediate plans are a summer tour with Def Leppard, a package deal that enables them to capture an audience that might consider dropping $75 for a good seat to see both bands, but certainly not for one as the only headliner. I mean my wife saw Lep at a frigging county fair a few days after the boy was born, and that was nearly 11 years ago.

If KISS thinks that all of these incessant press releases that Gene and Paul keep issuing are going to translate into more ticket sales, then they are mistaken. For all of this talk to try an legitimize the band's current line up or to build any kind of sympathy for Stanley's bullshit concern for all of the other band members hired hands, they are merely showing how greedy and  ego-driven they are by pretending that they are anything but a brand that based more on their history than any current creative output.You see a lot of references to the band's 40th anniversary, but let's be honest here: those four decades continue to pull from the original line up years quite heavily.

All they had to do was play nice for a night. Christ, they could have easily just gathered at the end of the performance for a one-off version of "Rock & Roll All Night" and then gone their separate ways. Instead, Simmons and Stanley needed to make it a fighting match after they've already won and gotten exactly what they wanted. Rather than confront the anger and bitterness for a mere three minutes and thirty seconds as a thank you to those fans that brought them out of their shitty little existence that was Wicked Lester, they piss on their own food supply.

Take it back and give it to The Zombies.
Written by Todd Totale