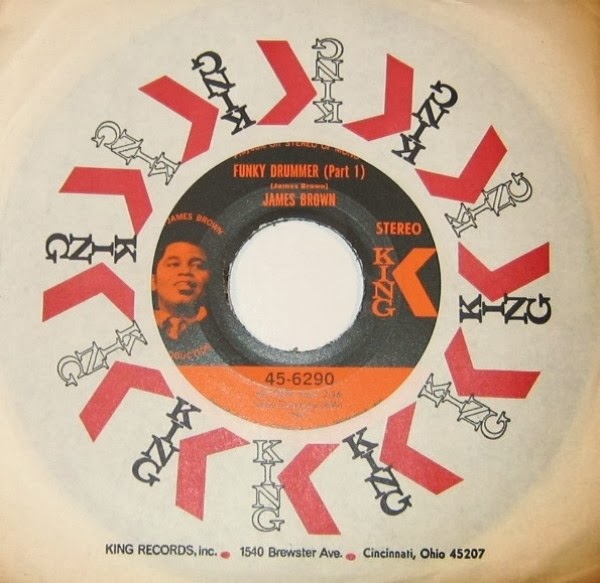 "The name of this tune is 'The Funky Drummer'" I told my son as we left the parking lot of Target. He came with me to pick up a few needed items for dinner that night, mainly because he was driving his Mother crazy at home, the result of some serious cabin fever for both of our children because of the never-ending winter we seem to be experiencing this year in the Midwest.

I pushed play and James Brown began to count off the song, a seven-minute long classic that would easily make its way into my "greatest songs of all time" list, if I ever thought I could compile one. The only reason "The Funky Drummer" made its way into the stereo of our minivan this evening was because I thought it would be perfectly timed from our journey from Target to back home, hopefully ending with Brown's naming ceremony at the end of the song as soon as we pulled into our driveway.

My son tolerates such impromptu music lessons, because if I don't occasionally target a few of these acknowledged classics for him, his musical knowledge would be dictated by the playlist of our city's Top 40 station, and influence he listens to nearly every night when he goes to bed.

I suppose I did the same thing at his age, but my upbringing was a lot more musically adventurous that what he currently displays. He loves music to some extent and even sings in his school's chorus, but there is little evidence that he has the same passion for music that his father has, and every now and then some tutoring is needed.

"This is one of the most sampled songs in history." I explained, immediately remembering that he probably has no idea what sampling is. The explanation is going nowhere, but then he asks something that hints at being remotely interested in what I'm telling him.

"When was this song recorded?" he asks.

"No it wasn't!" He corrects, even though I know he has no idea what the hell he's talking about. I take my Rock & Roll history somewhat seriously, primarily out of necessity of self-preservation rather than attempting to be a trivia snob trying to assert authority. Considering this, I retort with the commanding "E, you don't know anything about James Brown, so how do you think you know when 'The Funky Drummer' was recorded?"

I swear to God, this is how I interact with my son. With that being said, his historical knowledge of professional wrestling is impressive. He even reminded me once that Jimmy "Superfly" Snuka may have killed his girlfriend in 1983.

"James Brown?" replies my son. "I thought you were talking about Chris Brown!"

It's true: "The Funky Drummer" will turn 45 this year, and the drum break that inspired Mr. Brown's last minute song title has been the foundation for untold numbers of rap and R&B tracks during the last three decades, continues to inspire countless artists and listeners with its infectious beat.

If sheet music exists for "The Funky Drummer," it probably only takes a page. The basic pattern of the song would run a full measure before the instruction on the next measure read "Vamp til ready" and then ended.

Each member of The James Brown Orchestra gets a nod, punctuated by Brown's own verbal observations and direction. He enthusiastically yells "Bring on the juice!" before saxophonist St. Clair Pinckney starts his solo. When Pinckney gets near the end of his spot, Brown affirms "Still good!" allowing the horn player to blow for a few more measures. When things really begin to cook, it prompts a few "Good God!" and "I got to holler!" a few times throughout the rest of the song's seven minutes.

By the fifth minute of the track, we had pulled on to the last street leading to our home. There was no way that I would disrespect the Godfather of Soul by ending "The Funky Drummer" early, particularly if it's because of my inaccurate travel time calculations.

We would simply drive around the block.

"Fellas! One more time. I want to give the drummer some of this funky soul here." James interrupts. "You don't have to do no soloin' brother. Just keep what you got!" he instructs the man keeping such an impeccable ass-shaking groove. Clyde Stubblefield probably made $40 for his work on November 20th, 1969, possibly earning enough for a decent Thanksgiving meal for his family. I'll leave it to you to ponder if this is sufficient compensation for a drum pattern that ended up being used on million sellers and providing other artists with much more financial security.

And just like that, Stubblefield is left alone with his spontaneous spark of genius. For eight full bars, Clyde delivers his groundbreaking drum pattern unaccompanied, becoming the focal point and namesake of the song itself.

By the time Brown counts off the second time, we've made our way around the block and I hit the garage door opener to the faded refrains of "The funky drummer...The funky drummer" "So! Wasn't that one of the best songs you ever heard in your entire life?" I ask my son as we slow into the garage, sure of what the answer will be.

"It was OK." he responds, completely lacking anything resembling enthusiasm.

He's on his way inside while I stay seated, jaw dropped that he didn't have the same kind of visceral reaction that I did when I first heard "The Funky Drummer."

"Cut off the lights." I mutter to myself as I kill the headlamps on the minivan.

"And call the law."
Written by Todd Totale