Elton John - Don't Shoot Me I'm Only The Piano Player 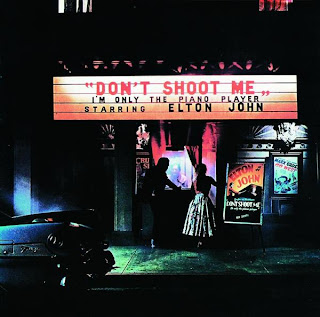 Here it is, the record that brought my seven-year-old self to his knees, a cute l’il descriptive until I remembered the Elton John mondegreen joke “Don’t let your son go down on me.”

The reality is that I had no perspective of sexuality at the age of seven. All I knew was that Elton was a crazy dresser with hundred thousand dollar eyewear and he had some good tunes that I enjoyed.

What I also didn’t know at that young age was that Don’t Shoot Me…I’m Only The Piano player was a hodgepodge of derivative styles and formulas that find Elton expanding his range while falling flat on more than one occasion.

And let’s be honest, songwriter Bernie Taupin and producer Gus Dudgeon are partially to blame here for not providing John with a safety net to fall back on when he gets a bit long in the tooth with his grandiose arrangements and over-the-top theatrics.

I’m guessing “Elderberry Wine” is an attempt to channel the nostalgic everyman rocket fuel of yesterday, but with lines like “The bottle went ‘round/Like a woman down south/Passed on from hand to hand” you begin to feel resentful that there wasn’t at least one of them to suggest “Try harder.”

Even more troubling is “Texan Love Song” which paints Elton as some kind of Bob Seger road dog, detailing a redneck’s point of view of some longhaired musician. “Ki-yi-yippie-yi-yi/You long hairs are sure gonna die” is the best that Taupin can come up with for a chorus, and Elton conjures up some dumb Texan drawl to the point where the entire thing is an embarrassment that taints up the entire album.

Don’t think that the hit singles-and there are two huge ones on Don’t Shoot Me-are exempt from criticism due to their high chart positions. “Daniel,” which itself is a tremendous lyrical study on the Vietnam war, is turned into a weak M.O.R. schmaltz thanks to Dudgeon’s production that it completely neuters the subject matter.

“Crocodile Rock” turns out to be nothing more than an American Graffiti cash grab that’s as authentic as a “Sit On It” t-shirt and a Bobby Vee show in . It’d be better served as Sha Na Na’s breakthrough hit instead of Elton’s follow up single to “Honky Cat.” Not only is Elton attempting to channel a bit of the 50’s into his repertoire, he’s clearly pointing the entire vehicle in the wrong direction after making some headway with the previous album, Honky Chateau.

Thankfully, it would be the very same year (1973) when Elton rights the ship with Goodbye Yellow Brick Road, so the stumble that is John’s sixth record was short-lived. But any fan who feels the need to dip into Elton’s catalog will find Don’t Shoot Me as reason enough to use the record for target practice.
Written by Todd Totale