Someone tell me how a bunch of land-locked indie veterans have the balls to name themselves after a large sea mammal and throw together some nautical titles and name it after World War 1? There’s the idea that White Whale is somehow a “supergroup” even though the most popular band that one of the members is from, the bassist, is The Get Up kids. Add to this that the band is from Lawrence, Kansas, a Midwestern town that’s so far removed from the sea and the assassination of an Austrian Archduke, that you could pretty much dismiss these guys without playing one note of their debut album.
But hold the phone, Franz Ferdinand, these guys have got something good going on.
Singer Matt Suggs sounds like Ray Davies, which is a strange vibe particularly when the first words out of his mouth on the album are “Won’t you lay your nine good fingers on me/Would you please keep that lone one wrapped in gauze?” So immediately we’re let on the notion that the band is not out to give us a history lesson about the Black Hand or an albums worth of sea shanties.
It is an epic endeavor, with elements of British progressive rock and obligatory indie chamber pop making their way into the sonic landscape. It’s a blast to listen to with headphones; cheap synths, feedback, and drum machines pop in an out of the mix with precision. They’ve spent a lot of time on this album and it’s an admirable effort.
The album’s lengthiest tracks, “O’William, O’Sara” and “Fidget and Fudge,” utilize this approach the most and, as a result, are the best tracks on the album. They more than make up for the album’s worst entry “I Love Lovely Chinese Gal.” I’ve hit forward every time that song has come on.
So one dud among a pretty impressive album of eleven; not a bad way to start off and a heckuva better than Suggs’ other Merge output via his last band, Butterglory. While they provided by-the-book Pavement low-fi ethos, White Whale actually embraces the recording studio as another member.
I’ve got to give Merge records credit for finding a worthy follow-up to the surprise that was the Arcade Fire. Comparisons are inevitable, but White Whale are distinctly unique in their approach. In fact, the only comparison to the Arcade Fire should be: how will these bands be able to improve on debut albums this good. 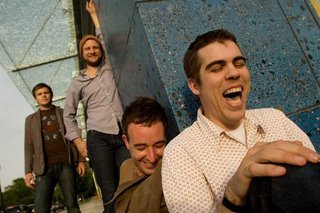